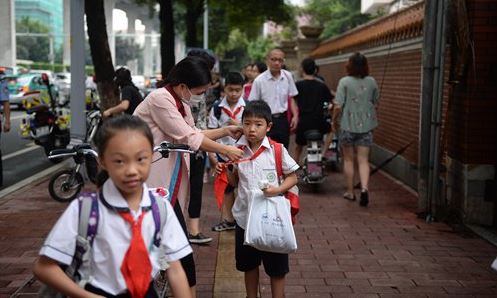 Students go to school on the first day of class after summer holiday in Guangzhou on Monday. (Photo: IC)

The Leiyang city government in Central China's Hunan Province proposed plans on Monday to resolve issues related to overcrowded classrooms, which triggered a violent protest this weekend.The government said it will make sure that the plans won't increase the financial burden on parents or affect students' health. Parents were enraged that their children were assigned to move out of their homes and attend a boarding school in a move to reduce class sizes. The parents claimed that newly decorated dorms to house the influx of students had toxic fumes. They were also angry about having to pay additional school fees.The Leiyang government will invite professional environment assessment institutions to examine the amount of methanal in newly-decorated dormitories in the Leiyang Campus of the High School Attached to Hunan Normal University, and will also invite parents to oversee the tests, Hunan-based news site rednet.cn reported Monday. The local government also promised that tuition fees charged at new schools will strictly follow the standard of public schools to ensure no extra burdens will be placed on parents, according to the rednet.cn report. The move came after a protest involving some 600 people outside the Leiyang government buildings on Saturday to protest against an education policy that reduces the class sizes at primary and middle schools. The unintended result of the policy is that children may be reassigned from reputable public schools near their homes to private schools or nearby rural areas, where they must stay in dorms.Outlawing overcrowded classrooms at primary and middle schools is a national education policy, laid out in a government work report in March 2018. Chen Baosheng, minister of education, asked administrators to "basically eliminate" overcrowded classrooms with more than 66 students by the end of 2018, and to eliminate overcrowded classrooms with more than 56 students by 2020, the Beijing News reported on March 16. Protests turn violentThe protest was triggered by parents' claims that there was excessive methanal gas in the dormitories at the Leiyang Campus of the High School Attached to Hunan Normal University, a private boarding school which received local public primary school students to reduce overcrowding. Online videos showed that hundreds of people, including juveniles and adults, clashed with police in uniforms with shields on Saturday in Leiyang. In one of the unverified videos, a protestor shouted, "I want to attend public schools" and "Give back my school!"The protest turned violent with police arresting 46 people that night. Protesters hurled bricks, firecrackers and gasoline bottles, injuring 30 during the standoff, Leiyang police said on its Weibo account on Sunday. Zeng, the grandfather of a middle-school girl who has been assigned to the Leiyang Campus of the High School Attached to Hunan Normal University, told the Global Times on Monday that local government officials talked to the students' parents on Monday, and they have properly dealt with the issue. "Now with the intervention of the government, several types of costs have been exempted and more are under negotiation," Zeng said.  He explained that the school no longer required parents to buy bedding or school uniforms, and water and power bills for students living in the dormitory have been exempted. Money problemsLocal parents' opposition against the plan to allocate students to other schools  started four months ago. According to the WeChat account of local media outlet Laiyang Shijie, more than 7,000 of the total 8,000 parents surveyed by the media in May said that they were opposed to the plan to move their children to a private boarding school, because they had concerns about expenses and their children's safety. The bureau said the school will assign teachers to guarantee the safety of the students, and those students' previous teachers at public schools will also be transferred to the new boarding school. Chu Zhaohui, a research fellow at the National Institute of Education Sciences, told the Global Times that overcrowding in classrooms in urban areas is caused by unbalanced education resources in urban and rural areas. "To solve the overcrowded classrooms issue, local government should improve the education resources available to rural and private schools. Simply issuing administrative orders cannot help," Chu said. "Recently, Chinese citizens also voiced dissatisfactions over healthcare, which showed that Chinese citizens' public awareness has increased. And it requires government to adapt to public oversight to improve its governance," Chu said.