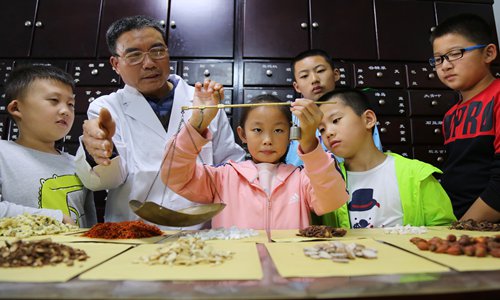 Zhang Shugong (Left), a TCM doctor from a clinic in Boxing county, East China's Shandong Province, teaches primary school students how to use scales to measure out herbal medicine on October 21. (Photos: IC)

Primary school students in East China's Zhejiang Province started a new course on Traditional Chinese Medicine (TCM) after it was introduced this fall, amid controversy that it may not be suitable for 12-year-old children and may not achieve its objective due to insufficiently professional teachers.
Some 400 students of the TCM course in Dongcheng Primary School affiliated to Hangzhou Normal University have been actively participating in class activities for the past month, Zhang Le, a TCM course teacher at the school, told the Global Times.
"Some interactive activities, such as smelling and tasting herbal medicine and tea, have also attracted many students," Zhang said.
Zhejiang was the first province to add the course, which contains basic TCM knowledge about massage, acupuncture and healthy diet, to its primary school curriculum this fall.
However, the course stirred heated debate among the public before making it to schools. Some netizens questioned the suitability of teachers for the course, as most schools simply assigned science teachers, while some were skeptical about TCM itself.

The textbook used for the course, "Traditional Chinese Medicine and Wellness (TCMW)," was designed for grade 5 students taking one class per week. The book contains stories from ancient China. Lesson one, for example, is "Shennong (an ancient Chinese chief known as Yandi) Discovering Curative Virtues of Plants," and tells of the process of how Chinese from ancient times discovered herbal medicine.
In his class, Zhang introduced common herbal medicines, such as ginseng, goji berries, dates and chrysanthemum, and even made chrysanthemum tea for students to taste.

"I chose the things that most students would come across in their daily lives, and made sure the class was easy and clear for them to understand, as the purpose of the course is to get children interested in TCM," Zhang said.
On February 26, under a guideline on boosting TCM's healthy development issued by the Zhejiang provincial government in October 2015, local primary and middle schools were required to add TCM to their curriculums.
Then in February 2016, the State Council released a national "Strategic Plan for the Development of Traditional Chinese Medicine (2016-2030)," which stipulated that basic TCM knowledge should enter campuses, communities, village and families by 2030.
Fang Jianqiao, president of Zhejiang Chinese Medical University (ZCMU) and the editor of TCMW, told the Qianjiang Evening News that the course not only offered medical knowledge, but also taught the culture and philosophy behind it, which would help boost young people's national confidence and sense of pride.
According to the Zhejiang education authority, the course was taught by the schools' science teachers, who were trained by ZCMU over the summer.

Some parents voiced their concerns to local media, expressing doubts that science teachers could teach TCM only after attending a hasty training course.
Zhang argued that "most science teachers with knowledge of biology and botany can teach basic TCM after training." He is an acupuncture major graduate from ZCMU.
In addition, TCM's scientific qualities and value system have been the subject of controversy for a long time. Doubts over TCM have grown among the public, triggered by recent scientific research that linked aristolochic acid, a compound found in many herbal medicines, with liver cancer.
Fang said that the challenge TCM faces in China is that TCM doctors vary in professional competence, but the great achievements made over the past several thousand years cannot be disputed.
Chu Zhaohui, a research fellow with the National Institute of Education Sciences, believed that the TCM course should be selective.
"The arrangement of the curriculum should meet children's overall growth needs, and they have limited time to learn and absorb knowledge. Getting all students to learn about TCM is unreasonable," Chu said.
Instead, primary schools should introduce more selective courses, such as courses on labor skills and social work, to cater to students' interests while limiting the number of compulsory courses, Chu said.