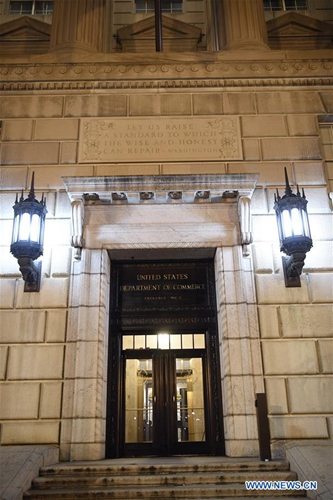 Photo taken on Friday shows the US Department of Commerce building in Washington D.C., the US. (Photo: Xinhua)

The partial government shutdown of the US left some Chinese observers worrying it may have an impact on January's Sino-US trade consultation.A partial shutdown of the US federal government came into effect on Friday midnight for the third time this year after failed attempts to end a budget impasse over President Donald Trump's long-promised border wall with Mexico.The shutdown will affect official departments, including the Department of Defense, the Postal Service and the State Department, which raised concerns among some Chinese scholars over whether it would influence the progress of the Sino-US trade consultation which was originally slated for January of 2019.The shutdown could make the Sino-US negotiation unpredictable, Song Guoyou, director of the Center for Economic Diplomacy of Fudan University, told the Global Times on Monday. "Negotiators of the US Trade Representative would probably be forced off work, which could influence the progress of the consultation." Diao Daming, an American studies expert at the Renmin University of China, on the other hand, said that the shutdown is not a surprise and has not involved the core interests of the US external affairs, such as the Sino-US trade consultation progress.The US embassy in China on Sunday also said that its account would stop updating on Sina Weibo because of fund allocation issues.