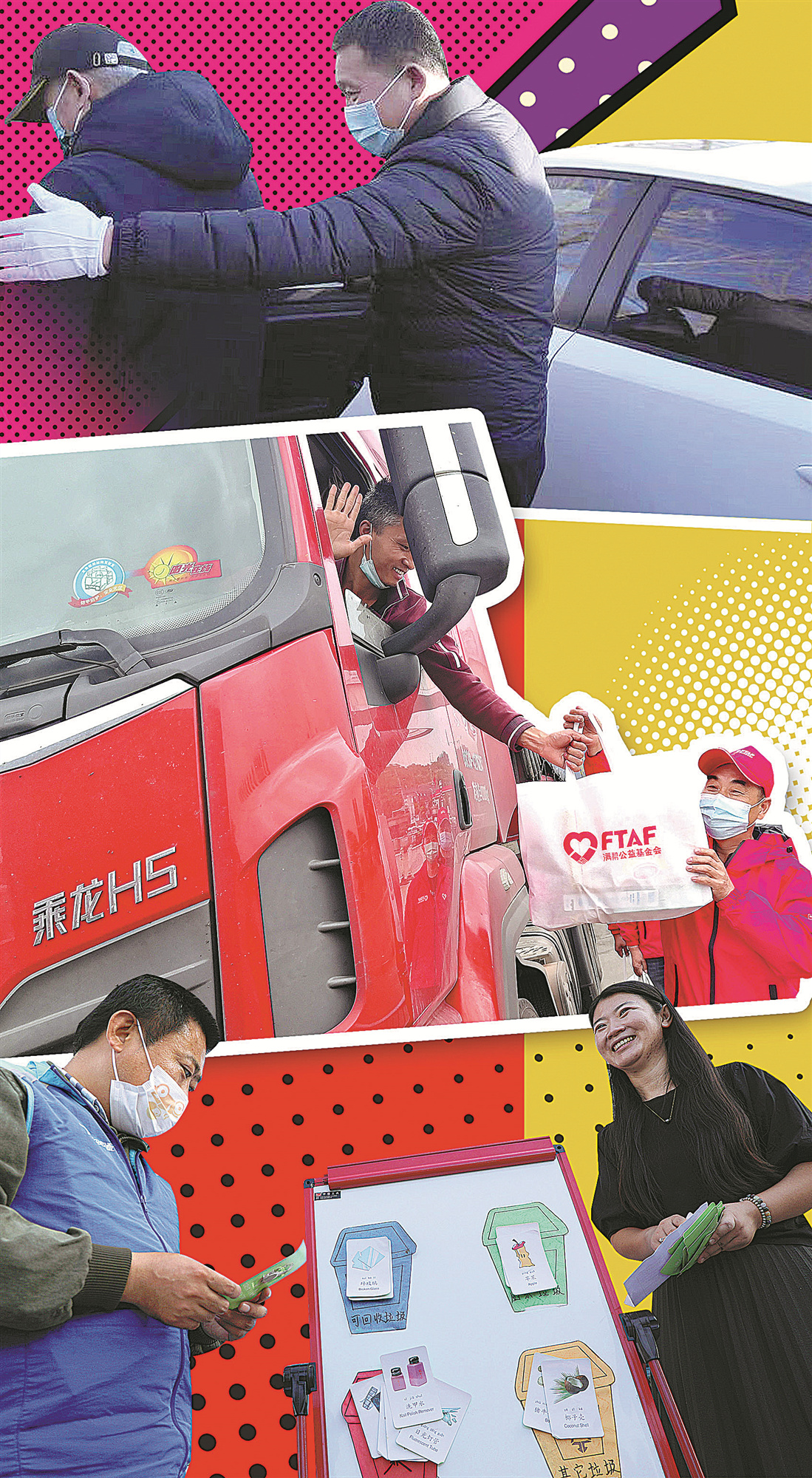 Members act as role models for their colleagues

Beijing resident Ma Renfeng has been on call recently as a ride-hailing driver to transport supplies to hospitals and neighborhoods to help contain the recent COVID-19 outbreak in the Chinese capital.

As a member of the Communist Party of China for 28 years, Ma voluntarily provides rides for medical staff members and so-called empty-nest seniors, those without any children or who do not live with their children－just by themselves or with their spouses.

Since November, he and other drivers who are Party members have collected elderly residents living in suburban communities and taken them for COVID-19 vaccinations, before returning them home, all free of charge.

"The elderly have given our work the thumbs-up. Everyone grows old, and empty-nest seniors especially need help. We Party members should set a good example," Ma said.

Many Party members such as Ma working in emerging sectors, including food and parcel deliveries, logistics, livestreaming and e-commerce, also act as role models for their colleagues.

Xi Jinping, general secretary of the CPC Central Committee, has praised the efforts of new employment groups on many occasions, especially during epidemic prevention and control work. He has also called for the rights and interests of flexible employment groups such as truck drivers and delivery workers to be protected.

The importance of guiding, gathering and serving such groups was underlined by Xi when he addressed the opening ceremony of a study session at the Party School of the Central Committee of the CPC on March 1, which was attended by young and middle-aged officials.

In the past year, the Party's organization departments nationwide have stepped up the formation of branches among emerging flexible employment groups, increasing the number of delivery riders, truck drivers and ride-hailing drivers.

These Party members receive guidance for setting examples among their groups and also act as a bridge between their colleagues and the authorities.

Beijing is home to a large number of people employed in emerging sectors, with a total of 220,000 employed on a daily basis as delivery workers and ride-hailing drivers, according to the Party's organization department in the capital.

The city has identified 1,268 Party members in such occupations and set up 218 Party branches for them based on specific conditions, according to the department.

The branch that Ma belongs to boasts 25 members who are drivers. "The members come from all over the country to work in Beijing, and the department strengthens our sense of belonging," he said.

"We drivers take to the road to earn a living, which provides a platform for us to take part in group activities," he said. "Each time an event is announced in our chat group, drivers sign up for it within minutes.

"Everyone is willing to join voluntary group activities such as planting trees, producing a good atmosphere."

Zhu Lijia, a professor at the National Academy of Governance, said that as many people in these new occupations joined the Party in their hometowns, they are unable to attend regular Party activities while working elsewhere.

However, organizing them together can give these Party members a "home", he said, adding that this is also helpful in making them fulfill their duties and obligations, and in remembering their original aspirations in joining the Party.

Party members in emerging industries can be guided to act as role models for their colleagues to provide better services to society, Zhu said. He added that grassroots Party organizations and their members, including delivery workers and couriers, play an important role in epidemic prevention and control work.

In April, Party member Zhang Ya, 56, a truck driver in Zunyi, Guizhou province, and his colleagues handed out gift kits to passing truck drivers at highway intersections and service areas, who were working during the epidemic.

"Truck drivers have a hard time on the road, especially during the epidemic. As Party members, we hope to provide them with some comforts to make their work easier," Zhang said.

He joined the Party in his 20s, when he was a farmer in his home village and wanted to help locals. Seeking a better life, Zhang left for Zunyi to do various jobs. With the logistics industry booming, he became a truck driver in 2013, transporting goods on trips that took one or two days. Sometimes he spent the night in his vehicle during these journeys.

It was difficult for drivers such as Zhang to take part in Party branch activities when they were on the road. To solve this problem, the Party's organization department and the transportation authority in Guizhou worked together to set up 22 Party branches for the drivers.

Comprising a total of 590 drivers, the branches are responsible to the Party committee of the Full Truck Alliance, also known as Manbang, which runs a domestic freight service platform.

Zhang, who was selected as secretary of a Party branch comprising more than 20 members, often helps truck drivers out of trouble.

To assist Party chiefs who are drivers, traffic law enforcement departments selected 22 Party members to guide each branch. Manbang sent 11 Party members to be deputy Party heads of the branches and to act as a link between drivers and the platform.

The 22 branches have launched chat groups, in which online studies on policies and traffic regulations are conducted through sharing articles and videos. The members communicate with each other in the groups, discussing their demands and difficulties.

However, he added that they sometimes face situations such as labor disputes.

Zhao Junjie, from the Party's organization department in Guizhou, said, "Party branches for drivers can act as a bridge between the drivers and the authorities to solve problems quickly."

To assist fellow truck drivers, Zhang set up a chat group with more than 200 colleagues from across the country. When someone asks for help in the group, Zhang and other Party members lent a hand.

"When we come across problems that cannot be solved, we report them to traffic and law enforcement departments through the Party branch," Zhang said.

Last year, a truck driver who lost his way in Guizhou sought help from Zhang, who immediately reported the situation to the traffic law enforcement department via the Party branch.

"Within half an hour, traffic police assisted the driver, who later wrote a note thanking us," Zhang said.

He and other Party members have listened to and collated more than 100 problems from drivers, passing them on to the authorities for assistance.

"I joined the Party to serve others. After forming the Party branch, we members can better help other drivers solve their problems," he said.

As of this month, authorities in Guizhou had settled about 680 demands from truck drivers, according to official data.

Zhao said, "Through care and help, the Party's organizations gather and unite truck drivers who are Party members, strengthening ties with the people."

In October, Lu Zhiqiang, a delivery rider, applied for membership at a Party branch in Shigezhuang subdistrict in Changping district, Beijing, where he often collects and delivers meals. His application is now being examined by Party officials.

"I have friends who are Party members, and under their influence I have always wanted to join," said Lu, who left his hometown of Shenyang, Liaoning province, for Beijing in 2018 to find work and support his family.

Lu is hardworking and thrifty. He gets up at about 6 am and sometimes doesn't return home until 1 am the next morning. To save time and money when he has few orders, he usually rushes home to cook meals.

"When it rains heavily and I don't have a raincoat, I try to get the food delivered on time, even though I'm soaked through. The only time I feel really aggrieved is when I get bad reviews or complaints from customers," he said.

To connect with and help workers such as Lu, the subdistrict launched a service station in August near a building housing many restaurants where delivery riders collect meals.

The service station offers the workers an opportunity to rest between busy periods. They also recharge their phones there and heat meals. There are facilities outside the station for the riders to recharge their battery-powered vehicles. Various activities have been organized at the station, including free health checks and traffic regulation training. During family reunion holidays, the subdistrict arranges for the riders to cook and have meals together.

Lu said: "When we spend holidays together, I feel at home here. Everyone is welcome at the service station－the delivery riders, cleaners and security guards." He added that meeting at the station also gives the workers an opportunity to forward their problems to the authorities.

Guo Feng, a grassroots official in the subdistrict, said: "It's a way to bring us closer. Many of these people are working alone in Beijing, but through these activities, we hope they can feel the warmth of home and care from the Party."

About 380 service stations have been launched since June last year in Changping, where 140 delivery workers have applied for Party membership, according to official data.