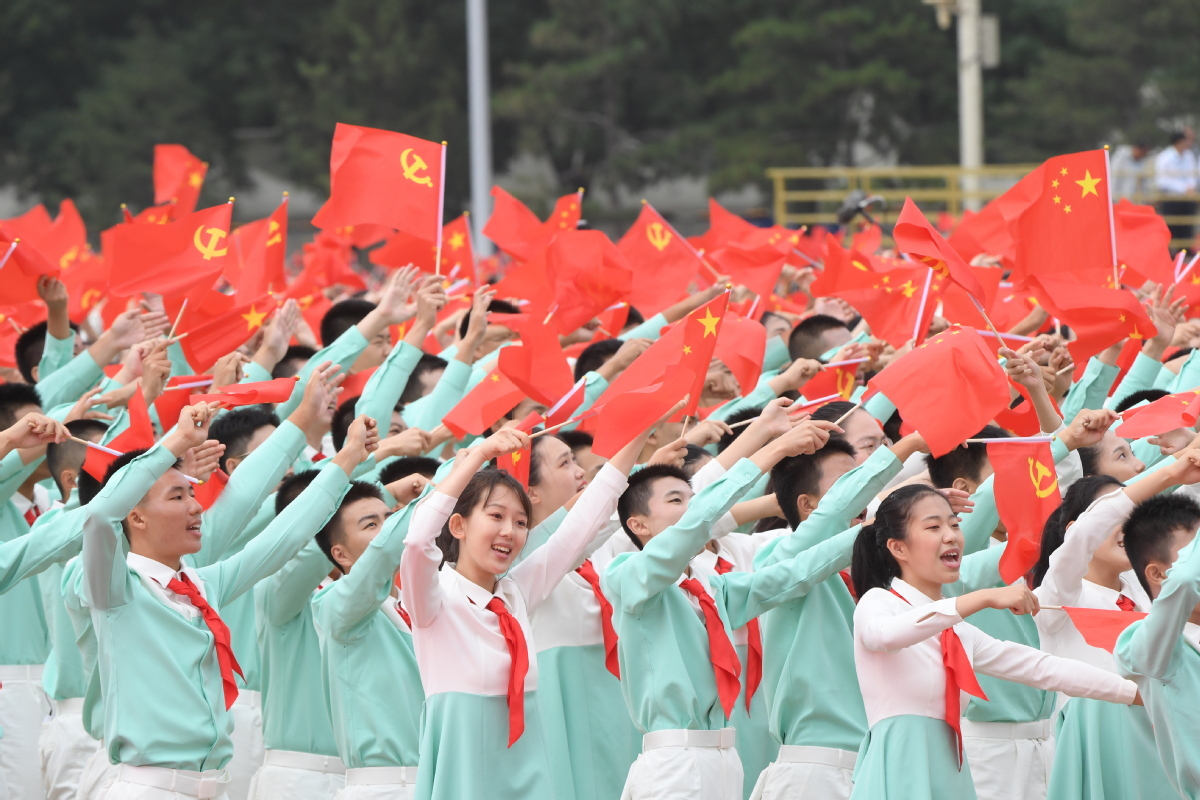 Young people wave national flags and Party flags to celebrate the centenary of the Communist Party of China at Tian'anmen Square in Beijing in 2021. [Photo: Xinhua]

The Communist Party of China is demonstrating strong vitality and vigor, with a large number of outstanding young people joining its organizations each year to carry forward its cause, a senior Party official said on Thursday, one day ahead of the 101st anniversary of the Party's founding.

Since its 18th National Congress in 2012, the Party has attached great importance to recruiting young members to join the continuous struggle for realizing the nation's revitalization, said Qi Jiabin, a member of the Ministerial Board of the Organization Department of the CPC Central Committee.

About 4 million people have applied to join the Party each year since 2012, and more than 80 percent of the people recruited by the Party have been aged 35 or below, he said.

The number of Party members surpassed 96.71 million as of the end of last year, 3.7 percent higher than a year earlier, and 15.9 percent more than the figure in late 2012, according to a report issued by Qi's organization department on Wednesday.

More than 4.38 million people joined the Party last year when the Party marked its centenary, 1.96 million more than the previous year, figures from the report showed.

Qi said that through theoretical training and visits to revolutionary education bases, young people have been guided to learn about the Party's innovative theory, understand the Party's original mission and deepen their passion for it.

"In the fight against COVID-19, many young medical workers born in the 1990s and after 2000 have expressed their desire to join the Party while working on the front lines," Qi said.

In terms of self improvement, the Party vowed to take the initiative in meeting new situations and challenges in the fight against corruption, even though it has seen achievements against graft over the past decade.

From the 18th CPC National Congress in 2012 to the end of April, about 4.71 million people were investigated for suspected disciplinary and legal infractions, said Wang Jianxin, an official from the Central Commission for Discipline Inspection of the CPC and the National Supervisory Commission.

Some 74,000 people have also voluntarily turned themselves in to discipline inspection and supervision commissions nationwide since the 19th CPC National Congress in 2017, Wang said.

"Those who committed violations were strictly held accountable and harshly punished, no matter who they were and how high the positions they held. We've fulfilled our promise that fighting corruption is by no means an empty gesture," he added.

In the past 10 years, efforts in anti-graft work have been strengthened with "zero tolerance" and through various means, he said, adding that a relatively complete system of intra-Party rules and a legal system against corruption have been formed, with all Party members and public officers placed under supervision.