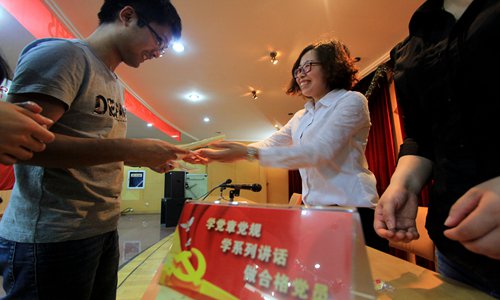 The Communist Party of China (CPC) Central Committee has issued a regulation on the Party's publicity and communication work, emphasizing the importance of ideological work and requiring publicity organs to be established in Party branches in villages, state-owned enterprises and universities.

In a notice, the central committee said that publicity and communication work is of vital importance to the Party and is a fine tradition and political advantage for the Party as it leads people to understand the success in the revolution and national construction and reform, the Xinhua News Agency reported.

The circular asked CPC organizations at all levels to further strengthen the Party's overall leadership over publicity work to ensure that major decisions and plans of the CPC Central Committee in this regard are implemented.

The regulation emphasizes that publicity work should build a socialist ideology with strong cohesion and leadership, to strengthen the vitality and creativity of socialist spiritual civilization and to enhance the attractiveness and influence of Chinese culture.

The full text of the regulation was not published yet.

The regulation said that the Party's publicity departments should promote the Party's policies and decisions, analyze and keep informed of public opinions, hold news conferences accordingly and conduct publicity work to other countries, so to help exchange of cultures, assist Chinese culture to go out and inform other countries of the human rights development of China.

Officials with Party publicity department hailed the regulation as a milestone in the Party's publicity development, as it provides strong guidance and support for CPC's publicity work, and makes new steps forward in a scientific and standardized fashion.

The regulation contains a separate article addressing a relatively weak point of Party publicity work at the grass-roots level. It stipulates that Party organizations at the county level should have a member of the Party committee who is specifically responsible for the work. It requires Party publicity agencies be established in Party organizations within state-owned or state-controlled enterprises, and publicity departments should be established in Party branches in colleges and universities.

The regulation asked Party committees and governments at all levels to strengthen the building county-level media integration centers. The construction, management and use of grass-roots level publicity institutes including public libraries, cultural venues, and museums were also emphasized in the regulation.

While international public opinion and discourse is still driven by Western media, Chinese voices have become stronger. Clashes between the two pose challenges especially at the grass-roots levels, so it is urgent that malicious infiltration from the West be prevented, and to unwaveringly stick to the Chinese route and ideology, a Beijing-based media policy expert surnamed Luo, told the Global Times on Sunday.

The analyst cited the recent unrest in Hong Kong as an example, saying that "the special administrative region is unique in certain ways, but the obvious lack of quality media work in the society, in particular in education institutions such as universities, to some extent, has led to the current chaos, among other causes."

Analysts on Sunday commented that such a regulation on publicity is of great necessity, especially where Chinese publicity work is increasingly confronted with challenges from Western ideologies, and it is crucial to stick to the correct political course set by the Party and China.

The regulation stipulates that publicity and communication work will be evaluated for their ideological accountability and discipline supervision system, which according to experts, "is to focus on the implementation stage," and they believe that such an evaluation will be conducted in a scientific fashion without adding unnecessary pressure on officials.

A firefighter in Beijing, who is also in charge of his brigade's publicity work, told the Global Times on Sunday that the regulation may help raise awareness of the importance of publicity work by grass-roots departments.

"Currently we are short of talent and training, such as proficiency in social media, which is a major channel to communicate with the public," said the firefighter who requested anonymity.