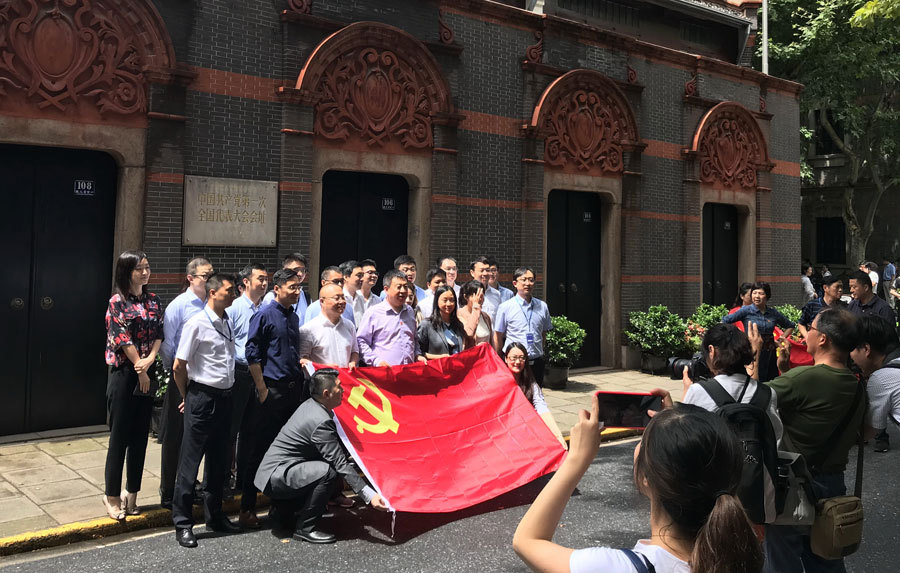 Visitors take pictures in front of The Memorial for the Site of the First National Congress of the Communist Party of China in Shanghai on Monday, the 98th anniversary of CPC's founding. (Photo: Gao Erqiang/China Daily)

The Communist Party of China Central Committee made public on Tuesday the first document that targets the supervision of chief officials and leadership teams at all levels in a bid to strengthen strict governance and discipline within the Party.

The guidelines say that many effective measures have been implemented and experience has been accumulated in this area of work since the 18th CPC National Congress in 2012, yet oversight of chief officials at all levels remains a weak link, exposing the urgent need to improve the Party's internal supervision system.

"The greater the responsibility that leading officials assume, the more important positions they hold and the more urgent it is to strengthen supervision of them," the guidelines said.

The focus of such oversight should be political, which scrutinizes the performance of chief officials and leadership teams at all levels in remaining loyal to the Party and acting in accordance with the Party's nature and purpose, according to the document.

Noting that oversight of chief officials at all levels should be the top priority, the guidelines said those officials should willingly accept such oversight and have the courage to shoulder responsibilities in their work.

"Leadership teams are the backbone of the Party's governance structure and they lead the Party's future development, so they are a key group and key object of supervision," said Chen Yaxin, deputy director of the regulations office of the CPC Central Commission for Discipline Inspection and the National Supervisory Commission.

He said that since the 18th CPC National Congress, the Party has attached great importance to supervision. However, among the cases of serious disciplinary violations these years, a considerable proportion involved chief officials.

"The formulation of the guidelines demonstrates the CPC Central Committee's firm determination to crack down on difficult problems related to internal administration," he added.

The document stresses top-down organizational oversight, requiring chief officials to step up their disciplinary supervision of chief officials at the lower level of the hierarchy.

It also highlights peer supervision among members of a leadership team, stating that any acts against Party discipline or rules should be promptly reported to the central disciplinary watchdogs. Those who conceal these problems will also be held accountable.

The guidelines also make clear that chief officials must draw a clear line with businesspeople, never use political power for personal gain or allow family members to take advantage of their powers to make profits.

Chen said these requirements are also the main focus of political supervision and the purpose is to urge leading teams at all levels to constantly "improve their political judgment, understanding and practice, adhere to loyalty, cleanliness and responsibility and take the lead in upholding the authority of the CPC Central Committee and its centralized and unified leadership over the country".