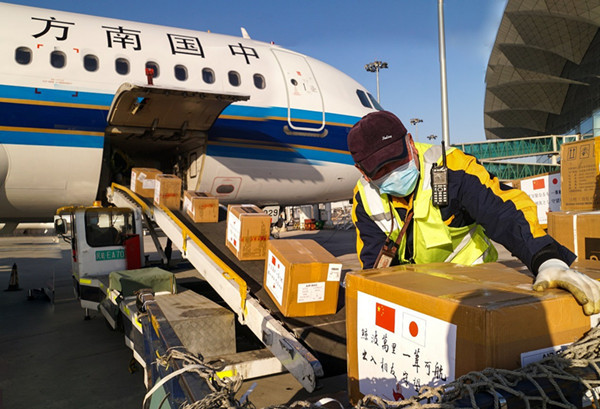 China has greatly enhanced its international air freight capacity to ensure the smooth running of the supply chain amid the ongoing novel coronavirus pandemic, according to the country's top aviation regulator.

The aviation authority has set up a green channel and continued to reduce operational costs for international air cargo trips, as well as adding more charter flights and opening new air routes, said Jin Junhao, an official in the Civil Aviation Administration of China's Department of Transport.

These measures will increase the country's international air freight capacity and guarantee smooth cargo transportation worldwide, he said at a news conference on Wednesday.

Domestic and foreign-owned international cargo flights in China are expected to total 1,989 this week, connecting with 93 destinations in 45 countries around the world, Jin said.

However, with air passenger services dwindling worldwide due to the outbreak, the cargo volume carried in the hold of passenger planes, which previously accounted for about half of the world's air cargo, has continued to plummet, resulting in a staggering decline in air cargo capacity.

In response to the concern, the administration is encouraging airlines to help fill the severe shortage in freight capacity by turning passenger jets, which sit idle at airports due to the outbreak, into cargo-only airplanes to haul medical supplies, daily necessities and production materials, he said.

China Eastern Airlines has recently removed about 160 economy seats from each of its six A330-200 wide-body passenger aircraft to carry goods, according to the company.

"It's important to look at the market from a new perspective, as difficulties are aggravated by the coronavirus," he said. "By using the cargo compartment of parked passenger aircraft, not only can we respond to the changing demand of cargo transport by diversifying our cargo routes, we can also reduce aircraft parking fees."

According to the administration, among this week's 1,989 international cargo flights, 939 trips, or over 47 percent, were made by passenger aircraft refitted into cargo-only airplanes.