CHINA Past and present: 40 years of change in the lives of the Chinese people

Past and present: 40 years of change in the lives of the Chinese people 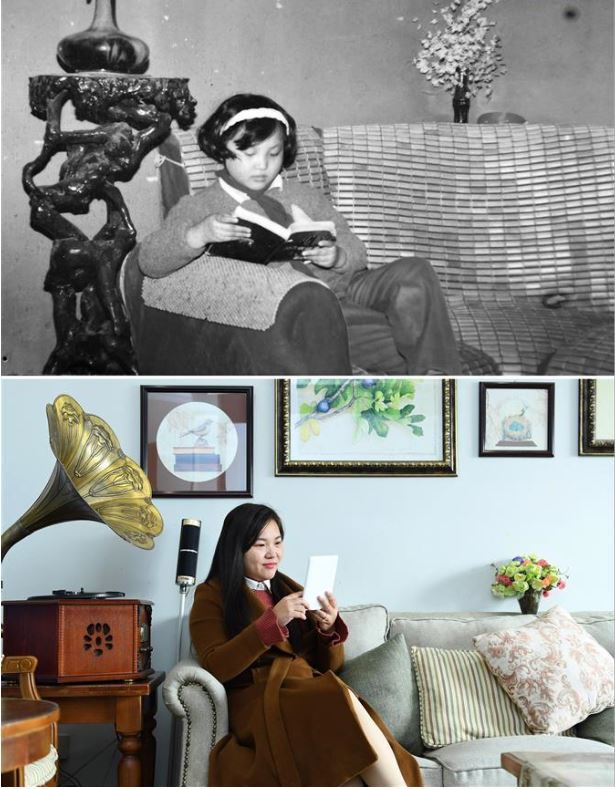 The upper part of this combo photo taken in 1993 shows eight-year-old Peng Jing reading a book at home in Nanchang, capital city of east China's Jiangxi Province. At that time her family lived in an 80-square-meter apartment and owned a 14-inch color TV. The lower part of the combo photo taken by Wan Xiang on Nov. 14, 2018 shows 33-year-old Peng Jing reading an ebook at home in Nanchang. Peng, who is now working in a media, lives in a 180-square-meter apartment. (Photo: Xinhua)

BEIJING, Dec. 14 (Xinhua) -- Temperatures dropping below minus 30 degrees Celsius are common for the winter in the Greater Hinggan Mountains in northeast China's Heilongjiang Province. But for Cui Bo, the season doesn't have much difference from summer, at least at home.

Equipped with a heating system, the temperature in her apartment is kept at a comfortable 28 degree Celsius and Cui always walks around wearing a T-shirt.

But the picture was completely different when Cui was young.

"In 1985 when I was eight, winter was long and bitter," Cui says. She and her parents and brother crammed into a 48-square-meter room where the only place they could keep warm was a brick bed heated by fire.

"Life has become so much better over the past few decades," Cui said. Her feeling is shared by hundreds of millions of people in China.

In 1978, China embarked on the journey of reform and opening-up. The policy has not only lifted the country from poverty to prosperity but also changed the lives of many.

Official statistics show that between 1978 and 2017, China's gross domestic product has increased from 367.9 billion yuan to 82.7 trillion yuan.

Per capita disposable income increased from 171 yuan in 1978 to 25,974 yuan in 2017, while the rural population under the poverty line decreased by 740 million.

Sixty-year-old Wang Hanming remembers in 1985 when he got married to his wife, all they had was a 30-square-meter house with almost no electric appliances.

He says that in the 1970s, a bicycle, a sewing machine and a watch were the "Three Must Haves" for a betrothal gift. In the 1980s, they were upgraded to a black and white TV, an ice-box and a washing machine. But he could barely make ends meet.

However, their lives have been moving forward step by step with the developments of China's economy and improvements of their personal income. After moving six times, they now live in a three-story house of over 200 square meters.

Bai Yang, 33, an interior designer in Beijing, recalls that when she was a child, the most valuable item at home was a 24-inch color TV, costing more than her father's annual income. Now, she easily bought a 60-inch TV, spending much less than her monthly salary.

Poor families were not left behind. From 2008 to 2017, redevelopment of run-down urban areas helped 100 million people move from sub-standard accommodation to new apartments.

And since the 18th CPC National Congress, China has allocated 162.5 billion yuan in subsidies for renovating the sub-standard housing of 16.59 million rural households, and helping tens of millions of rural households move into proper accommodation from dilapidated houses built of such materials as beaten earth, timber and bark.

For 67-year-old Li Fu, the change in transport in the past four decades has impressed him the most.

"When I was young, riding bicycle was the most common and fashionable method of transportation. A private car was an absolute luxury beyond my imagination," Li says.

Back in 1970s and 1980s, legions of commuter bicycles were a spectacle on China's streets and the "kingdom of bicycles" was one of the names foreigners used to refer to China.

Today China is still full of bicycles, but dockless shared bikes backed by e-commerce innovation. At the same time, a car has become a household item and prevails in urban traffic.

According to the China Association of Automobile Manufacturers, China produced 29 million automobiles last year and sold 28.9 million, ranking the first in the world for the ninth year in a row.

By the end of 2017, the number of private cars in China had reached 184 million, more than 40 motor vehicles owned for every 100 families.

Li now has his own car. He uses the vehicle to work, to visit friends and relatives and to travel around the country. For him, life has become much more convenient and diverse with a car.

In the 1970s and 1980s, books written by Sanmao, a female writer from China's Taiwan region, were among the bestsellers at the time. Her vivid and exotic travel writing depicting her life and adventures in Europe and Africa offered a glimpse of what the outside world was like, winning the hearts of hundreds of thousands of readers in the Chinese mainland.

Now, except for turning to books, Chinese people have plenty of ways to enjoy and explore the world.

Liu Yu said that when she was young, traveling abroad sounded as remote as traveling to Mars. Now she has studied in France, has a French husband and returned to Shanghai to open a French restaurant.

Since China opened its door to the world 40 years ago, its people have been able to embrace various cultures, as well as keep pace with the latest trends and benefits from science and technology development.

The past 40 years have meant a lot to China and the Chinese people. In return, every Chinese person has played their part.