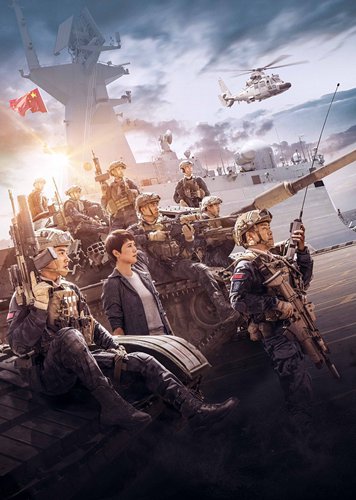 Operation Red Sea, a patriotic movie about Chinese marines carrying out a daring rescue overseas has hit the screens in China during the country’s busiest movie-going season -- Spring Festival. Directed by Hong Kong director Dante Lam, the movie tells the story of a group Chinese marines on a rescue mission in an unnamed African country. Lam also directed the military action blockbuster Operation Mekong in 2016.Operation Red Sea is loosely based on the evacuation of Chinese citizens and foreign nationals from Yemen during the 2015 Yemeni Civil War.The movie also features the Chinese frigate the 054 A, which participated in the Yemen evacuation, and several other naval vessels including the amphibious transport dock“Kunlun Shan.”Operation Red Sea is the first movie co-produced by the Chinese Navy and contains side stories reflecting real political issues.At the end of the film, there are scenes of a Chinese naval patrol vessel driving away a foreign ship that had illegally entered the South China Sea. In the movie, the eight-person “Jiaolong Commando”unit is a Chinese Navy’s Special forces team capable of carrying out missions in any foreign land under all conditions. The movie attempts to depict the special force’s combat readiness on the sea, on land and in the air. As of Friday afternoon, ticket websites show the film was in fourth place among the six big-budget films released for the Spring Festival holiday season, with ticket sales worth about 102 million yuan ($16.07million). The fantasy movies Monster Hunt 2 topped the list with earnings of 482 million yuan, followed by Monkey King 3 with ticket sales of 335 million yuan.The PLA Navy Marine Corps has carried out missions outside China several times, including escort missions in the Gulf of Aden and in Somali waters. A military insider who wished not to give his name told the Global Times after watching the movie that the movie showcased the Chinese Navy’s capabilities. As China’s overseas economic interests continue to expand, the need to protect the nation’s interests has also risen amid increasing potential threats, said the insider. China’s military vessels are a kind of moveable homeland that project a strong image during foreign visits, and are a top-priority in protecting Chinese who live in overseas coastal areas, the insider said.