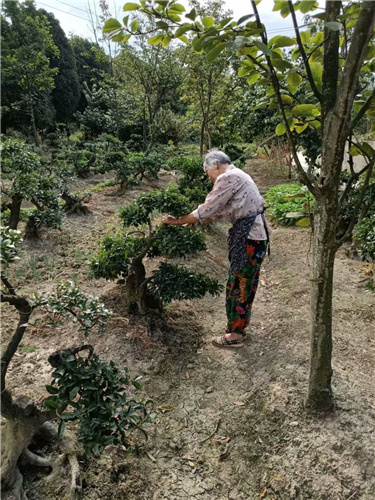 A villager takes care of bonsai trees at the planting cooperative in Maodong village in Guiyang, Guizhou province. (Photo provided to China Daily)

Maodong villagers have grown accustomed to tour buses arriving over the years.

Tourists are drawn to the Xifeng Concentration Camp memorial hall, a revolutionary history museum in the village that sits in Guiyang city of Guizhou province. The concentration camp was the largest, highest-level prison set up by the Kuomintang in 1938 and was abolished in 1946. More than 1,200 members of the Communist Party of China and patriots were detained there, and 600 of them were tortured and killed in the prison.

The prison is now a popular patriotic education site in Guizhou.

Chen Mengju, an official of Maodong village, says annual tourist visits to the site have exceeded 700,000.

The site's popularity has also boosted rural tourism in the village.

Many tourists would go on to tour the rest of Maodong after visiting the camp, especially during the spring and summer.

Unique folk dwellings are built against the mountain backdrop, with red flowers and green willows dancing in the warm spring breeze and a gurgling stream nearby.

When the summer comes, many Chongqing tourists would come to beat the summer heat in the small village. And all 1,100 beds in lodgings will be fully booked.

Wu Jiaqi, who runs the Sanjia Inn in the village, has continuously improved the infrastructure and planted flowers to make his inn more beautiful and comfortable for his guests.

Tourists can pick grapes, walk in the field and go hiking.

Wu believes it is the unique red tourism and continuous improvements of the rural environment that draw more tourists to visit the village.

In the past, there were only mud roads connecting locals in Maodong. Garbage-treatment facilities and tourism infrastructure were nowhere to be found.

Most villagers struggled to make a living and some had to work away from home to support their families.

Then in 2008, the Xifeng Concentration Camp memorial hall opened to the public for free, and a tourism town was developed right next to it.

Since then, great changes have taken place. A plaza covering an area of 800 square meters was built, roads were paved, and street lamps and trees were put in place. Garbage was also cleared.

All these changes have given Maodong a face-lift and attracted tourists from afar.

Seeing the positive changes, the villagers began to invest in catering and accommodation. Restaurants, hotels, inns and happy farmhouses sprung up.

The village has also established a tourism development company to manage the tourism businesses.

Liu Yunlong now runs a catering center of the Xifeng Concentration Camp memorial hall. He is one of the locals who have come back to the village for work opportunities.

His catering center often receives more than 1,000 tourists a day.

During peak season, the catering center can serve more than 250 tables a day.

"We are very optimistic about the red tourism industry in our home," he says.

Liu says that he got tired of his life away from home looking for jobs.

A few years ago, he brought back his savings and working experience and signed a contract with the catering center with two other locals.

Many other villagers have also relied on the booming red tourism industry to develop orchard and flower nursery businesses.

In 2017, a planting cooperative was set up and a professional fruit planting enterprise was introduced to develop a high-quality fruit picking garden. Villagers were encouraged to join the cooperative and grow fruit trees under professional guidance.

The move has helped more than 130 rural households increase their income levels.

In addition, the village works with flower companies to develop cultivation of roses and peonies as well as a variety of trees and bonsai.

Liu Kaiyang is now fully focused on taking care of tree seedlings at the fruit picking garden in Maodong.

His family contributed 3 mu (0.2 hectares) of land as part of the garden.

The rental of his family's land gives his family a fixed annual income of 1,800 yuan.

"I get more than 1,000 yuan a month by working here and will get more dividends once the orchard makes a profit," he says.