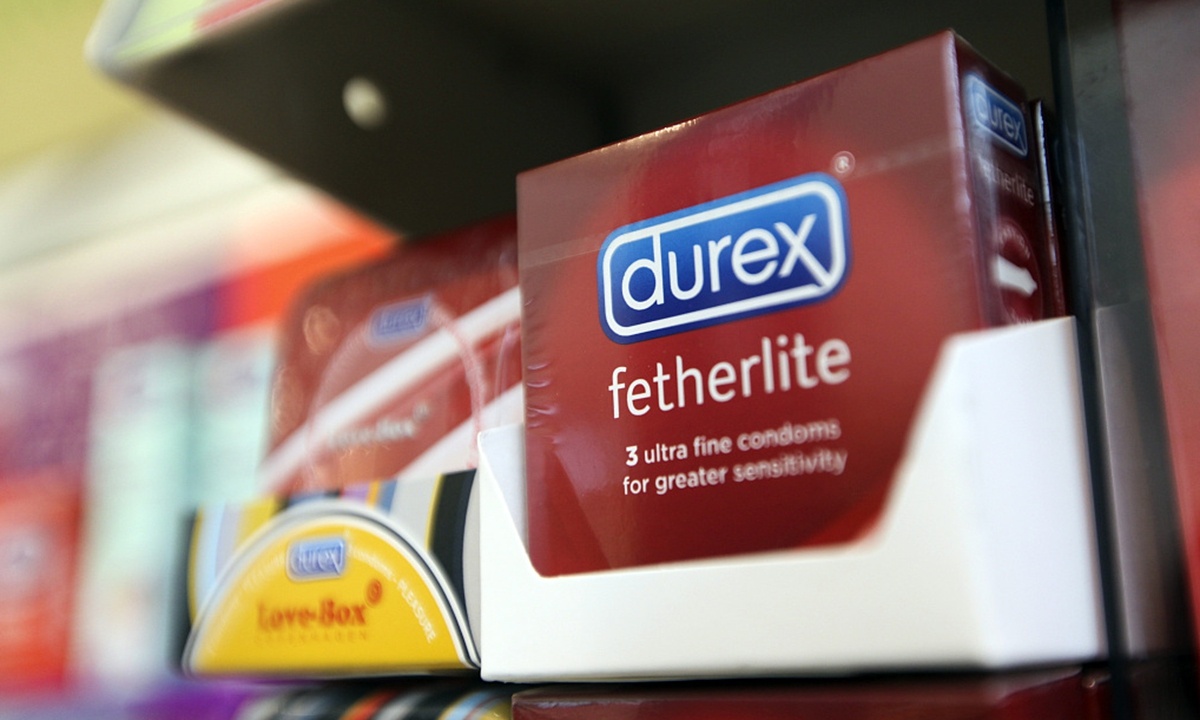 When advertising by condom and sex toy maker Durex became overly explicit, it crossed a legal red line in China.

The Shanghai market regulator has announced it would fine Durex, which has long been hailed as a social media champion in "innuendo and witty wordplay" for its "vulgar" advertisements. The penalty caused heated online debate on Thursday on the acceptability of sex products' explicit advertising under Chinese laws, and the tolerance of modern-day Chinese society over open discussions about sex.

RB & Manon Business (Shanghai), a subsidiary of SSL Healthcare (Shanghai), which manufactures Durex branded condoms and sex toys, was fined 810,000 yuan ($120,690) by Shanghai market supervisors in July for posting an ad that contained "superstitious and vulgar content" on its Tmall online store, media reported on Wednesday.

Some netizens said the description the ad used made them feel like they were reading pornographic literature.

RB & Manon Business told the Global Times on Thursday that it had been informed of the punishment and had removed the involved advertisement. It hadn't given further comment as of press time.

The ad drew the penalty for violating China's Advertising Law, which bans ads from containing anything that would "jeopardize social and public order and violate good social conventions," the bureau said.

"It had content that was sexually stimulating and sexually suggestive… [which brought it under the government's] rectification scope on vulgar advertising," the bureau said in a written reply to the Global Times on Thursday, urging enterprises to establish correct values and use healthy ads.

Durex has long been known by Chinese netizens for its creative, witty ads and posters that track trending topics. The penalty it received caused a stir on Chinese social media on Thursday, with a related Weibo topic having got 1.21 billion views as of press time.

Legal experts told the Global Times the penalty is necessary and justified, considering the ad's overly explicit content and the open platform it was published on, which was accessible to all — including minors.

"The indecent suggestion in the ad can lead to misconceptions of some people about sex, especially among juveniles," Zhang Bo, a registered lawyer based in Central China's Henan Province, told the Global Times on Thursday.

The ad also went against the mainstream morals of Chinese society, which don't encourage open talk about sex, Zhang added.

Durex is good at making eye-catching advertisements, many of which have drawn wide attention and discussion among the Chinese public for their unique creativity. But some legal experts believe that Durex should distinguish between vulgarity and creativity, and avoid challenging the boundaries of the law.

Chinese public opinion, however, seems to be divided over the Durex controversy, and whether modernday Chinese society should be more tolerant to discussions about sex.

"It is a company that makes sex products, how classy do you expect it to be?" a user wrote, adding that the government should take a more relaxed and flexible approach as "sex is no longer considered a taboo" in today's modern and open Chinese society.

Gender studies scholar Chen Yaya suggested that China's laws and administrative rules should set clear and definite boundaries for the advertising of adult products. Some of the clauses, including "violating good social conventions," are too ambiguous to be used in managing these controversial ads, said Chen, who is a research fellow at the Center for Gender and Social Development Studies under the Shanghai Academy of Social Sciences.

"The Durex ad did look vulgar, but it was better left to be punished by the market rather than by regulators," Chen told the Global Times on Thursday, saying that in most cases, Chinese customers will spontaneously boycott a brand or a product over inappropriate behavior.

It is not the first time that Durex was penalized for its ads. In December 2019, market supervisors fined SSL Healthcare (Shanghai) 800,000 yuan for sexually suggestive phrases it used in a Durex marketing campaign, such as "every mouth deserves to be fed." Prior to that, Durex had made an apology in the face of a backlash from Chinese netizens.