Peter Navarro, a hawk that 'lacks intellect and common sense' 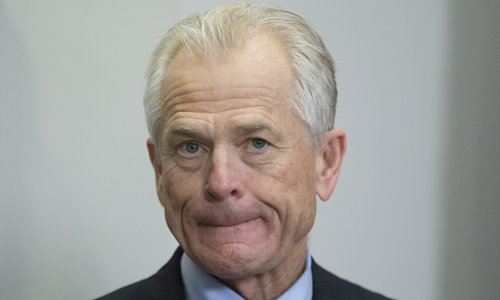 Navarro used the idea of the seven sins to criticize China, which showed his narrow and distorted mind

Navarro has been called the US President Donald Trump's "spirit animal" as Donald Trump Jr. called him "a fierce warrior" for his father's America First trade agenda

Politicians like Navarro have ruined the efforts made in the China-US trade talks and US society will pay for this, analysts said

White House trade adviser Peter Navarro on Sunday said that China must end the "seven deadly sins," a remark that was criticized by Chinese experts as "absurd and full of hostility" and that Navarro's dominance of economic issues in the White House is a source of sadness in current China-US trade ties.

Navarro, 69, is a White House trade adviser and ardent supporter of the trade war. Several days earlier, Trump escalated his tariff war with China and Navarro was the only person at the announcement who supported it.

Navarro used the Christian concept of the seven deadly sins to criticize China, which showed his narrow and distorted mind. His willful moves to stir up hatred between countries are the real sin, analysts said.

He has written three books discrediting China and produced documentaries portraying Beijing as a threat. He ingratiates himself with those in the White House in order to get promoted. He has a "big mouth" and was told to shut up after saying the Canadian Prime Minister deserves "a special place in hell." He has written a number of books, but has always been an unrecognized "non-mainstream economist."

Navarro's distinguishing feature among White House staff and senior officials is likely not that he is more of a "hawk" than others, but that he lacks intellect and common sense. He is highly compatible with his leader in his use of irrational methods, a Chinese scholar told the Global Times.

Axios has obtained a copy of a draft executive order Navarro put together in the fall of 2017 that would have imposed tariffs on every product imported from every country doing significant business with North Korea, according to Axios.

"Its death is thanks to — well, just about everyone. Officials at Commerce, State, Treasury, and the Office of the United States Trade Representative all considered the proposal totally unworkable," Axios reported.

As long as he's in the administration, there will be a persistent, noisy, enthusiastic voice for these kinds of tariffs, according to Axios.

In fact, Navarro was out of favor in the White House when he proposed the tariffs. The American website Vox Media recalled that in the fall of 2017, John Kelly, then White House chief of staff, began controlling advisers' access to Trump by having Gary Cohen, director of the White House national economic council, restrain Navarro.

What did Navarro do? In order to get more direct contact with Trump, he often lurked in the West Wing of the White House at night and on weekends.

Navarro was named director of the newly established White House national trade council after President Trump's election in 2016, and he remained director after it was transformed into the White House office of trade and manufacturing policy in April 2017.

However, Navarro's first year in the White House was difficult because Trump's economic team was run by "globalists."

An American with ties to Trump's business team told the Global Times that Navarro did not have his own team in the first few months in the White House and had to attend meetings alone. Not only was he excluded from many high-level strategy meetings, he was also required to copy all work emails to Cohen.

However, two personnel changes in early 2018 gave Navarro an opportunity. In February, Rob Porter, a top political aide and White House staff secretary who was a key supporter of free trade, resigned over domestic violence allegations. In March 2018, Cohen resigned after Trump insisted on tariffs on steel and aluminum products.

Navarro was eager for the vacant position and went all out for it in private, but publicly pulled his punches and said he wasn't competing for it, Politico reported.

Navarro eventually failed, but rose in stature. According to one American trade expert, Trump wanted protectionism, but almost everyone in the room disagreed.

Lü Xiang, an American issues expert at the Chinese Academy of Social Science, told the Global Times that Navarro's role in the process of economic policymaking in White House was elevated after Cohen's resignation. It is said that his annual salary was raised from second class to first class from March 2018, lower only than that of the President and vice president, which shows the appreciation with which he has been received.

In May 2018, the China-US high-level trade consultation was held in Washington.

A reporter at Bloomberg said the White House had not scheduled Navarro for the talks because of his inappropriate and unprofessional behavior. But Navarro criticized Steven Mnuchin, secretary of the US Treasury, in the media for giving too much ground in the talks. A few days later, Trump repudiated the negotiations and imposed taxes on $50 billion worth of Chinese products.

Given Navarro's influence, Time magazine published an article in August 2018 saying that he does not have as much power as Mnuchin or the same responsibilities as trade representative Robert Lighthizer, but that his role should not be underestimated. If Stephen Miller, a controversial White House senior adviser, is the infamous player behind immigration, Navarro is the core leader of a series of much-criticized economic policies.

In published photos, Navarro looks somber, with a high forehead and gray hair.

He has a lot more to show for himself, with his Harvard degree, his doctorate and so on, but it is his paranoia that is his most memorable feature. In fact, Navarro originally wanted to be a politician, not an adviser, but he had a problem: people don't like him.

Navarro was originally registered as a Republican, but ran unsuccessfully for office four times as a Democrat in the 1990s. He was once close to Nancy Pelosi, speaker of the United States House of Representatives, and former secretary of state Hillary Clinton.

When he ran for congress in 1996, then-president Bill Clinton opposed him. His defeat was devastating: his wife divorced him and he fell deeply into debt.

Until 2008, he was a supporter of Democratic politicians, especially Hillary Clinton. But in the election of 2016, Navarro became an adviser to Trump. Trump is said to have suffered without the help of economists, and his son-in-law Jared Kushner asked Navarro to join after searching Navarro's book on Amazon.

Born into a working-class family, Navarro grew up with his mother and was a hard-working graduate of two prestigious universities, Tufts and Harvard. However, his experience can be described as changeable and ill-fated.

Lü argues that his life experience has led to Navarro's perennial unhappiness, and that he will spare no effort to translate his absurd claims into concrete policies once he is promoted by a leader who approves of him.

Although he is valued by his leader, Navarro was not liked by his colleagues. According to some American media, Navarro has a tough personality, and can be unaccommodating and unpopular. Navarro is as rude as ever when Trump cannot hear, scolding and belittling those who disagree with him.

Navarro was called "President Trump's spirit animal" by Axios news website, as many scholars and experts in economy poured scorn upon his ideas on trade.

"Peter is a fierce warrior for my father's America First trade agenda, and while it may upset some members of the failed bipartisan establishment of the Washington Swamp, he understands that we can't allow China to continue taking advantage of American workers and hollowing out our industrial base," Donald Trump Jr. said in a statement to The Washington Post. "His only agenda is my father's agenda and the White House is lucky to have him."

Some media pointed out that Navarro is the president's intimate friend only when they talk about tariffs.

Experts said that Navarro was away from the spotlight for a while but then came back with a madder attitude.

Navarro appeared on Fox news on June 13, criticizing China in many fields, including intellectual protection and currency.

Many of Navarro's propositions on trade and economy are condemned as unreasonable. Many mainstream economists think he has created a new school of economics dubbed the "stupid school." His theories usually go against the principles of economics and he has made basic mistakes. In his articles, he has confused tariffs with added-value tax, Lü said.

"While purportedly an economist by training, Navarro's economics is misguided, inaccurate and politicized," Stephen Roach, a faculty member at Yale University, and former chairman of Morgan Stanley Asia, wrote in an editorial for the Global Times in July 2018.

It is normal that China and the US have differences, as they have their own interests. Instead of offering constructive advice to deal with these differences, Navarro has acted more like a political agitator. China and the US have gone through 12 rounds of trade talks and are trying to find ways to reach a consensus. The actions of some politicians, including Navarro, remind us that certain politicians' tricks have ruined the good momentum of the trade talks again and again, Chinese experts noted that the US society will eventually pay for these politicians' wrong deeds.

Wang Huicong contributed to the reporting