Petrified, angry, and hopeless—these feelings can describe the sentiments of Hong Kong parents Monday as rioters continued to push the city to the brink of chaos. 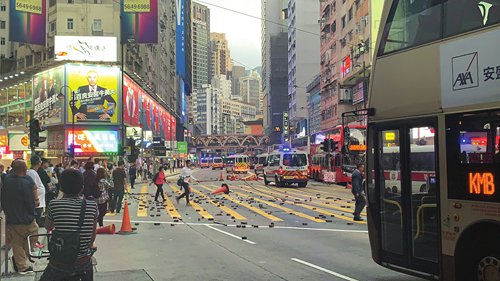 A street is destroyed by rioters on Monday in Hong Kong. (Photo: Global Times)

Rioters threw Molotov cocktails at a school bus Monday morning as residents saw some of Hong Kong's infrastructure set on fire. They even intimidated a police officer's daughter online, threatening to "pick her up" in retaliation for the live round shot in Sai Wan Ho.

Rioters dressed in black ambushed a police officer Monday morning after two rioters came in proximity of the officer, holding metal bars. A rioter wearing white confronted the officer, ignoring police warnings. The rioter tried to grab the officer's arm while another rioter tried to steal his gun. The officer fired three shots, hitting one of the rioters.

An hour later, information about the officer's daughter had been released on social networks like LIHKG and Telegram. Doxing has been a common tactic of rioters in recent months as frontline police officers and their families have endured cyber attacks. 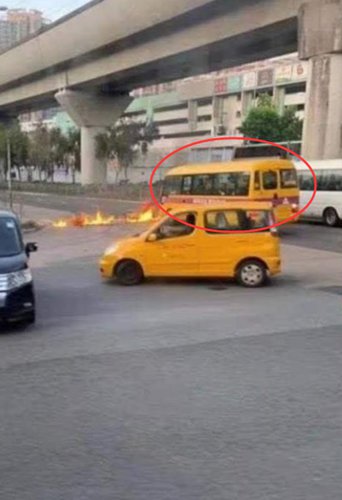 A school bus is stopped on the road by fire in Hong Kong on Monday. (Photo: Internet)

A few rioters threatened to throw the girl from the roof of a building, as revenge for their "companion who got shot," according to comments posted online.

Other inhumane acts frightened Hong Kong residents, particularly parents, such as rioters setting a fire in front of a school bus. "This is exact lawlessness. If it's necessary, we'll protect our children no matter the cost," Zheng told the Global Times.

These events have further angered Hong Kong parents who are asking if the city is still safe for their children.

According to Zheng, the mother, the school had to end classes at 10:45 am, and some police officers came to the school to escort the involved officer's daughter home.

However, there were rioters blocking the road to the school and violence occurred, so many students had to stay at school for two more hours before they could safely leave. A school bus was blocked at Mong Kok and could not send all children home by 4 pm. The school has announced its suspension of classes on Tuesday and Wednesday.

"In such a turbulent time, let us protect our children and give them support on spirit," the school said to parents in a notice.

Another mother whose child was in the school told the Global Times that usually children of different grades leave the school at different times, but after the terror threat on Monday, the school gathered all the students regardless of grade level and urgently confirmed with each parent to pick up their children. 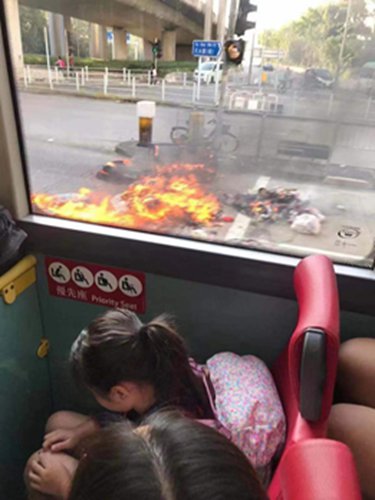 School children are scared by a fire outside the school bus set by rioters in Hong Kong on Monday. (Photo: Internet)

"My daughter is in primary school, but when they were evacuated, they already knew the reason. Teachers and students were extremely nervous due to rumors. She said that some teachers burst into tears. So did some young children," the anonymous mother said.

When the bus left school, there were "not a few" private cars outside the gate, with people in black inside. "Some children saw the people taking knives. Later, school employees told the children to close the curtains and do not look outside."

This was not the only incident involving children of police officers facing constant harassment and threats. The rioters have spread hateful messages online aimed at the police over the past five months, while some of their children have been bullied at school.

A Hong Kong police association informed its members earlier in November that police officers' children could be enrolled into schools in mainland cities.

Connie, a police officer's wife in Hong Kong, told the Global Times that since they received the information, "almost all the people with school-age children applied, as many as 500 families."

She said that during a survey to police families, 900 want their children to leave Hong Kong, and 80 percent want them to go to the mainland.

Connie had planned to send her children to the Chinese mainland next autumn, but after the Monday incident, she changed her mind to next spring.

"We could not wish the father to see our children every week. We only want to send our children to a place where they could grow up safely," she said.

For many parents of cross-border schoolchildren living in Hong Kong, how to send their children back to the mainland has become a question of profound concern.

They not only worry about the street violence and serious disturbance, but about potential bullying, harassment, discrimination and other threats their children might face in Hong Kong schools.

"My child asked me why he cannot speak Putonghua in crowded public space, I have no way to respond," a mother who has been living in Hong Kong for five years told the Global Times. "When we saw a group of people on the street besieging and abusing the police officers, the kid asked me why they assault the police who came for protecting us. I don't know what to say." 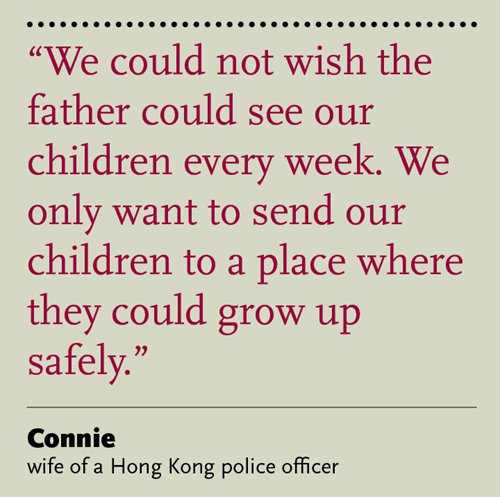 "I came to Hong Kong originally for giving the kids more opportunities for his growing. He can be exposed to both Western and Chinese cultures here. But I didn't expect that not only was his safety not guaranteed, but I also worried that his psychology would be affected by the dross here," this mother continued.

"I have no hope for my child's future here. I just want to take him back to the mainland. I have asked my friends to contact schools in the mainland for transferring," she said.

Many parents of cross-border schoolchildren face more painful choices. Since the vast majority of cross-border students were born in Hong Kong, the lack of mainland residency status means they cannot attend standard primary and secondary schools in the mainland. They have to choose international schools with higher fees.

"Can the government allow children with Hong Kong status to go back to the mainland with their parents with the mainland hukou [or household registration]?" asked one parent.

"Can there be some policies to support the backflow of parents and their children living in Hong Kong?" Many parents asked the Global Times reporters with pleading eyes. "Please give us and our children some support during the chaos," they said.

"The attractions of a Hong Kong-based education are fading fast for some parents from Shenzhen, its neighboring city in Guangdong," according to a report on the Hong Kong-based newspaper South China Morning Post on Sunday.

Kara Gao, director of admissions at the independent Whittle School & Studios which opened a campus in Shenzhen earlier this year, said the rising demand from parents has been obvious for about two months, the report said.

Most people who consult the school these days were firm about wanting to move back to Shenzhen as a long-term strategy, Gao was quoted as saying by SCMP.

She said the reasons varied from safety concerns to whether their children would be treated equally or bullied at school.

"As protection for their children and strategic planning for the family, they would consider moving. Shenzhen being just across the bay is the most direct and closest point for the backflow," she said in the report.

Monday and Tuesday was terrifying dark not just for the children of Hong Kong police, but for all children and parents in Hong Kong. Besides the school bus that was almost ignited by gasoline bombs, another kindergarten school bus was attacked by rioters.

According to the statement, there was a child onboard when the rioters smashed the school bus. Fortunately, the child was not hurt.

"I've never been in such a huge horror," a mother of a fourth-grade student told the Global Times. "My child commutes by school bus as we thought school bus was safe, but the incident scared my guts and I feel rattled all day."

The mother told the Global Times that the school bus her child took was scheduled to pass by Sai Wan Ho Street, but it changed routes because of traffic congestion. When she heard the incident happened in Sai Wan Ho Street, she felt extremely scared.

However, because rioters disrupted traffic across Hong Kong, many parents could not even get to their children's schools. Another mother told the Global Times on Monday that because rioters smashed the subways, buses also stopped. Two friends of hers could not get to school to pick up their evacuated children. They had no option but to ask another friend who owns a vehicle to pick their children, which took them several hours.

Children attending school in Hong Kong Island district had to climb over a mountain with their parents to go home because a side of the undersea tunnel was blocked.

A teacher with an international school based in Hong Kong surnamed Mu told the Global Times the school was under a circumstance of unease the whole day. Parents and children from both Hong Kong and the mainland were worried, as well as foreign students.

"More than a quarter of students in my class were absent today," Mu said. "Some students came in at 8 am, and were picked up by their parents at 9:30 because of the horror."

"Many students told me that they saw roadblocks and confrontation between police and rioters on their way to school, and I remind his students to drink as less water as possible as it could take one or more hours on their way home," said Mu.

He also told the Global Times more and more foreign students are leaving Hong Kong since their parents thought Hong Kong is no longer a safe place.

"I am extremely angry," a mother surnamed Zheng told the Global Times. "The rioters are absolutely lawless and know no bounds," said Zheng. She and some other parents decided to protect the children even if a human wall is needed to stop rioters from entering schools.