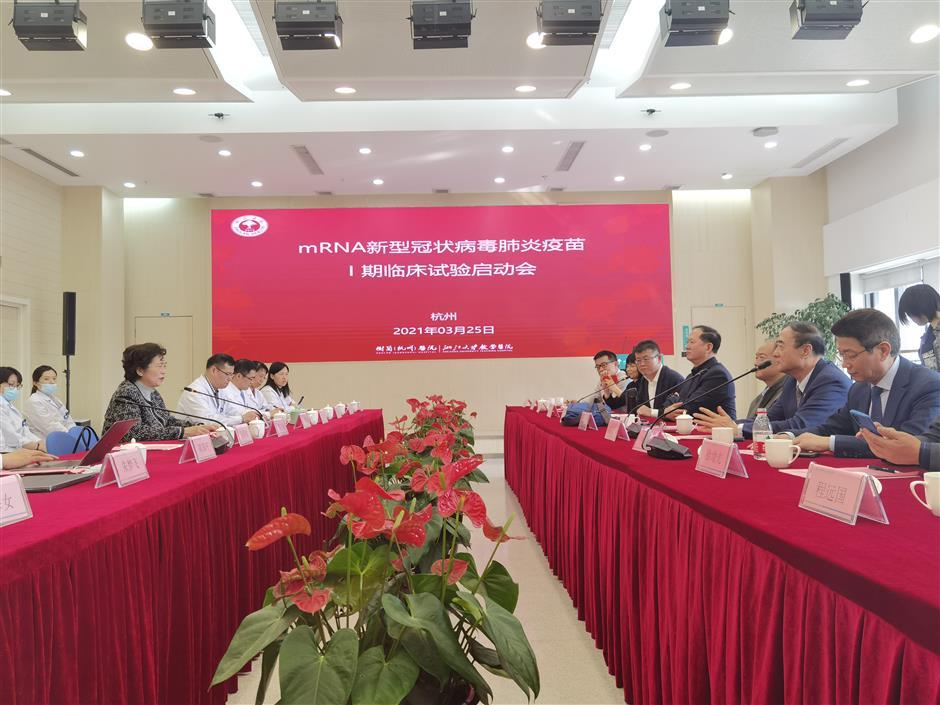 Li Lanjuan (left), a Chinese epidemiologist, and experts from Shanghai East Hospital discuss the clinical trials of a COVID-19 vaccine developed in Shanghai.

The mRNA (messenger ribonucleic acid) vaccine developed by Stemirna and Shanghai East Hospital will be tested on people aged 18 and above at Shulan (Hangzhou) Hospital, where similar trials have been conducted.

In cooperation with the Chinese Center for Disease Control and Prevention, the local team began its research in January last year, shortly after the coronavirus outbreak.

Based on the city’s mRNA emergency vaccine technology innovation center and the stem cell bank in Zhangjiang High-tech Park in Pudong, the team finished integration, production and testing of a vaccine sample in 40 days.

The vaccine was listed as one of the five emergency researches for COVID-19 vaccines by China’s Ministry of Science and Technology and overseen by the National Health Commission. It was approved by the National Medical Products Administration for clinical trials on January 4.

It is based on mRNA technology, which is used to deliver genetic material to the body and make human cells create a protein from the virus. This trains the immune system to be ready to attack if it encounters SARS-CoV-2.

The vaccine is one of the specialized projects of the vaccine lab at Tongji University, which has conducted multiple clinical trials for mRNA tumor vaccines.

The lab is expected to become a vaccine strategic bank of Shanghai with its rapid and highly efficient research capability during major public health incidents, said Liu Zhongmin, the hospital’s president.