The conservative image of chemical engineering PhD candidates at prestigious Chinese universities has been upended by the whimsical inventions and humor of Bi Xiaotian, a 25-year-old student at Beijing's Tsinghua University. 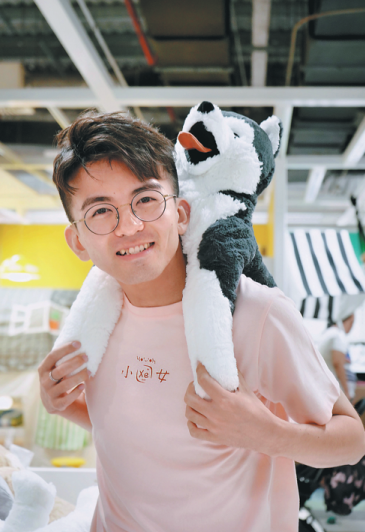 Bi Xiaotian is considering starting his own media company to transmit knowledge in his unique style. [Photo/China Daily]

They made him an online hit a year ago, and he is now considering starting his own media firm so that he can carry on transmitting his knowledge in his unique style.

"I just use an ingenious way of speech to show how a person full of scientific and technical knowledge can let the public know what science and technology looks like in daily life," he said.

Bi came to public attention because of a viral article on WeChat that attracted more than 1 million readers. In it, he outlined a logical and rational way to maximize the collection of lucky money.

The article was based on an experiment he conducted in which he used five cellphones to give himself 200 million yuan ($293,000) in pretend cash. Whoever opened the red packet last had the best chance of receiving the most money, he explained.

Bi's humor and offbeat explanations of daily matters have gained him more than 300,000 followers on Sina Weibo and a large group of fans who support his inventions and articles.

He started inventing when he was a student counselor in his first year as a PhD student. Then 23, he found his own way to establish relationships with his students.

"Confusion and uncertainty have become normal for freshmen at universities," Bi said. "And they tend to reject parents' warnings when entering college."

Bi didn't give specific instructions to his students, but advised them to follow and experience more to find out what they preferred to do by themselves. "When you learn more, you will get more confidence and find your own way in life," Bi said.

He found he became addicted to writing humorous articles about his classmates and class activities. Gradually, many students and teachers at Tsinghua University got to know of him.

"You don't have to use your thinking method only in scientific research, you can also use it in daily life," he said.

"You don't always have to be serious; you can express some serious things in a humorous way."

That approach made people understand things much better, he added.

One of his inventions was a sock-washing machine made from materials bought on Taobao, the online marketplace.

"I was thinking how to save time and energy, with less time spent washing socks, and the idea just came to me," he said.

Bi's sock-washing machine, and his detailed explanation of how he made it and how it worked, attracted a great deal of attention online.

He said most of his ideas come from everyday life, and small things gave him sufficient inspiration.

Like other PhD students, Bi spends most of his time in the lab, which he said had reduced the time he could spend communicating with others.

"If I hadn't taken the first step to post articles online, I would never have found my gift as a punster," he said.

"It's the inventions and insights that made me make up my mind and will give me the confidence to start my own business in the near future."