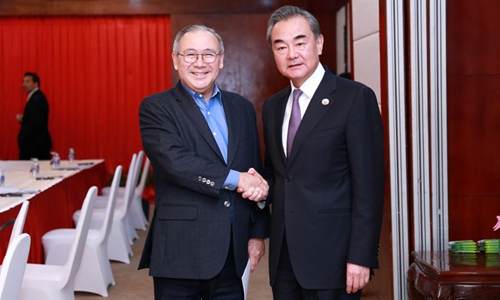 "The Philippines is open to collaborate with the Government of China with regard to innovative work, such as new drugs, and sharing of experiences and knowledge on COVID-19," a senior official at the Philippine Department of Health told Global Times on Wednesday.

The Philippine government announced a nationwide state of calamity for six months on Tuesday to curb the COVID-19 spread in the country, with 202 confirmed cases and 17 deaths.

"It's estimated that around 75,000 people in the Philippines will be affected by the coronavirus in two to three months, if drastic measures are not implemented," Vergeire said.

"The state of calamity means the government could mobilize the national resources as fast as possible, the national and local governments can access its quick response funds to address the needs of the public and enhance disaster preparedness efforts, to give more time to address the epidemic," Vergeire said.

Vergeire said the Philippines is open to learn successful strategies and experiences and share information with the international community, including China.

"If China and other countries develop medicine, the Philippines is open to adopt it after the drug is proven efficient and of high quality," she said.

She also noted that China made a very quick and efficient response in Wuhan and other areas in the country amid the battle against the virus outbreak, and the areas now report low numbers of infections.

Wednesday saw a rise in new confirmed cases reported in the Philippines, as the country is now trying to shift their policies from containment to mitigation, Vergeire said.

Containment in the country includes home quarantine and isolation. It is also trying to admit only 20 to 30 percent of infections who are severe cases and mild patients who are old and have other diseases. Mild cases or those with no symptoms will be sent back to home quarantine due to the limited medical resources, Vergeire noted.

"Hospitals and other medical resources in the country are challenged. We are more focused on the severe cases while suspected and mild infections are home quarantined," she said.

Vergeire noted the Philippines has no plan to mass test in the country due to limited medical resources.

If the epidemic becomes risky enough in the coming days, the Philippines would ask the help of China and other countries, Vergeire said.Under the state of calamity, the capital Manila is in a lockdown, but there are exceptions.

"The lockdown in the Philippines includes home quarantine and working remotely from home. Public transport has been suspended and mass gatherings are banned. But banks, drugstores, supermarkets, markets and manufacturing for necessities remain open," Vergeire said.

A first batch of 2,000 fast-testing kits arrived in Manila on Monday, according to the Chinese Embassy in the Philippines.