College students from around the world will learn how to build a community with a shared future for mankind through a summer school at Beijing Normal University. 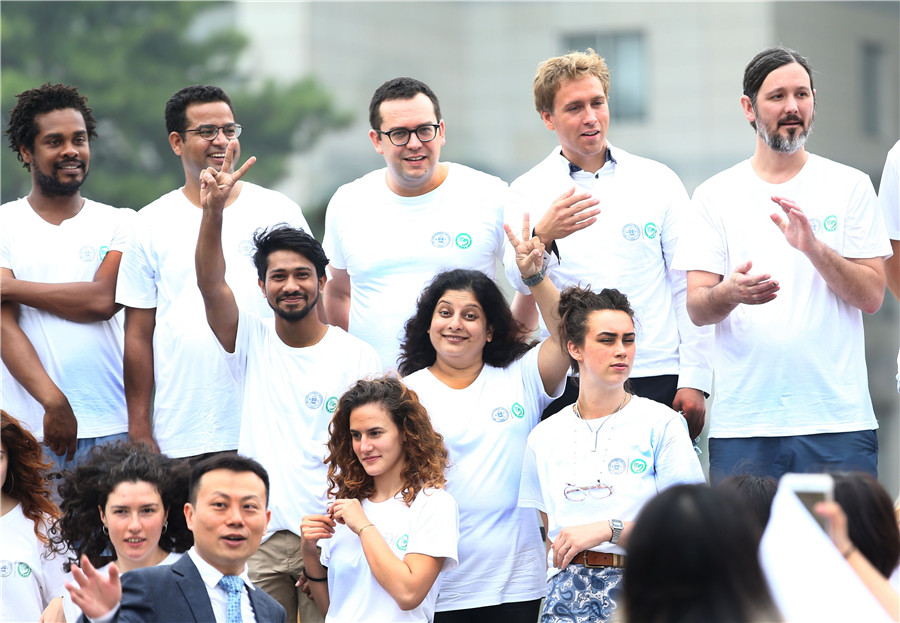 Students pose at the start of a philosophy summer school at Beijing Normal University on Monday. [Zou Hong/China Daily]

The opening ceremony for the annual philosophy summer school was held at the university on Monday. Thirty-four students from 16 countries and nine from domestic universities will spend two weeks together learning about traditional Chinese philosophy and contemporary China.

Wu Xiangdong, dean of the university's school of philosophy, said it is quite relevant for young students from different countries to discuss how to build a community with a shared future, given rising nationalist thinking and trade protectionism in various countries.

It is the first time the summer school, now its fourth year, has added the shared future theme to the program - co-hosted by the university and the Confucius Institute Headquarters in Beijing.

It also focuses on Confucianism and the concept of seeking harmony in diversity, an idea put forward by Confucius more than 2,000 years ago that can help to solve problems facing the world today, Wu said.

Different countries and civilizations are like musical notes, he said. Only by being different can they compose music. Likewise, countries should overcome cultural misunderstandings and conflicts through more exchanges, mutual learning, dialogue and inclusiveness, he added.

Traditional Chinese calligraphy and tai chi will also be part of their stay. They will visit famous scenic spots in Beijing, including the Great Wall, the Forbidden City and the National Museum of China.

John Major, an independent scholar of Chinese history and a lecturer at the summer school, said that while Confucianism was introduced to the Western world four centuries ago, it is still little understood.

The students can serve as ambassadors when they return home to spread the word that Confucianism is still relevant to modern life, he said.

Travis Quigley, a student majoring in political science from Tufts University in the United States, said Western philosophy advocates maximizing the interests of individuals, while Confucian teachings emphasize the values of generosity and humanitarianism.

The program makes connections between potential future leaders by forging personal and intellectual bonds. People across many nations can help solve disagreements in the way that forming personal friendships can help bring different groups closer, he said.

Runeko Lovell, also from the university, said the summer school provides a great opportunity to learn about Chinese culture and philosophy, which is not well-understood in the West.

From interactions with students from China and other countries, we can learn how to build a more close-knit and inclusive community, he said, adding: "The world needs a community with a shared future for mankind more than ever."