A cellphone number that ends with five "eights" was offered 2.25 million yuan ($324,000) at a court-organized online auction on Sunday, Beijing Daily reported on Monday. 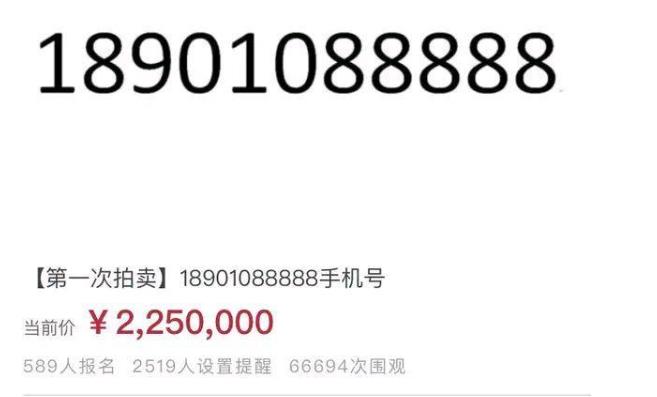 The phone number, which begins with "1890" and ends with five "eights", was issued by China Telecom, one of the country's largest telecom operators. It was put up for auction on the Taobao e-commerce platform with a starting price of 2,000 yuan.

A total of 589 people participated in the auction, which was organized by Chaoyang District People's Court in Beijing. 5,051 bids were made, attracting the attention of nearly 70,000 netizens.

Starting 10:00 am Saturday, the auction was estimated to end 24 hours later. But as people continued to make bids, the deal was not sealed until 11:23 am Sunday, when the lucky phone number fetched a staggering 2.25 million yuan.

Fierce competition was seen at the auction as the bidding price surpassed 1 million yuan at 3:17 pm Saturday, only five hours after the auction opened. At 9:13 am Sunday, the bid broke the 2 million yuan mark.

The figure "8", whose pronunciation resembles "fa" in Mandarin which means fortune, is a lucky number in Chinese culture.