Photo exhibition at Nixon Library recalls bridges between China, US 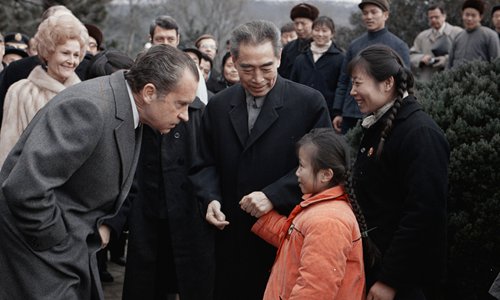 Late US President Richard Nixon has entered the spotlight again, as a special photo exhibition mirroring his historic visit to China in 1972 and its impact was inaugurated on Tuesday at his hometown of Yorba Linda in California.The exhibition presented at the Nixon Presidential Library and Museum was co-sponsored by the Nixon Foundation, Xinhua News Agency and China's national tourism authorities.The exhibition, entitled "Building A New Bridge: President Nixon's Legacy in Three Chinese Cities," chronicles the lasting impact of Nixon's historic trip to China in 1972, during which he toured the cities of Beijing, Shanghai and Hangzhou.US and Chinese dignitaries, patrons of the museum, and a few lucky members of the public witnessed the opening of the exhibit.Gene Hernandez, mayor of Yorba Linda, told Xinhua: "This presidential museum is our gem, a vibrant hub of community activity and a tribute to the enduring legacy of President Nixon. We are delighted to build a productive relationship with our friends from China."Nixon's youngest surviving brother, Edward, briefly took the podium to share how his brother had always told him that if he was confronted by a closed door, to find a way around it."We are all humans," Edward said, "We must use our brains for peace.""China is a builder of world peace, and a contributor to global development, and maintainer of international order ... committed to a path of peaceful development ... and win-win results," Zhang Ping, newly-appointed consul general of the Chinese Consulate to Los Angeles, told the crowd at the opening ceremony of the exhibition.He said that China would never seek hegemony, and looks forward to working with the United States "to carry forward the strategic vision and political wisdom of the leaders of the older generation ... to build a long lasting and healthy China-US relationship for the benefit of the people in both countries and the people in the world at large."Citing a current China-US trade value that has grown to some 580 billion US dollars, one third of which moves through Los Angeles customs, plus 10 billion dollars in the total investment in Southern California by Chinese enterprises and others, Zhang believed that China-US interests are more closely aligned than ever.He noted that the two countries should "transcend ideological differences, reject a zero sum cold war mentality, and work hard to enlarge their common interests through win-win co-operation.""Tourism is a special bridge to cover the gap between two different countries," Wu Ning, director of China National Tourist Office in Los Angeles, told Xinhua."President Nixon's visit to China 46 years ago is also a special trip of a very special American tourist," Wu said.Nixon traveled to China on Feb. 21, 1972 and shook then Chinese Premier Zhou Enlai's hand as the first sitting US president to ever set foot in China.Over the following seven days, Nixon and his wife visited many of China's historic and natural wonders, including the Forbidden City, the Ming Tombs and the Great Wall, as well as factories, hospitals and schools.On Feb. 28, the last day of the trip, the two countries released the Shanghai Communique, laying the foundation for the two countries to resume diplomatic ties.The new exhibit itself, described as "a portal back in time," shows a side-by-side comparison of almost 50 photos taken in 1972 during Nixon's historic visit and 50 photos taken last year in the same cities.The differences starkly highlight the dramatic progress China has achieved in just two generations.