Photos of 86-year-old Chinese military veteran Guan Maolin in tears while saluting his deceased comrades during the parade on New China's 70th birthday went viral on Chinese social media over the weekend. 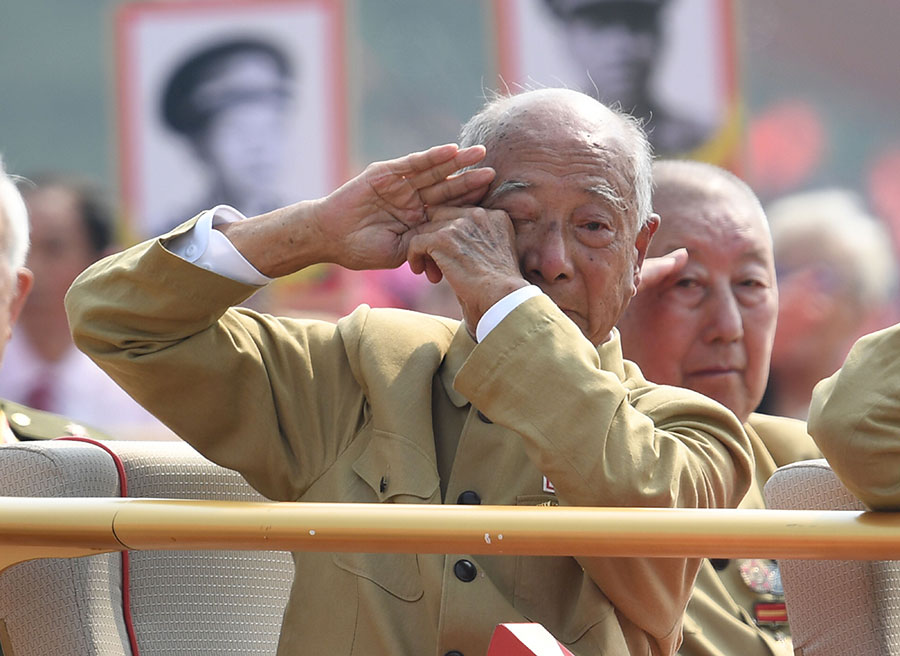 Veteran Guan Maolin tearfully salutes out of respect for his deceased comrades during the parade celebrating the 70th anniversary of the founding of the People's Republic of China at Tian'anmen Square on Oct 1, 2019. (Photo: Xinhua)

The photos were taken by Xinhua News Agency journalists. They showed Guan, dressed in a yellow military uniform, saluting with his right hand while wiping tears with his left.

The hashtag related to Guan's photos has received more than 90 million views on Sina Weibo on Monday.

On Xinhua's weibo account, a user named Yalan commented that "words cannot describe how grateful we are for your service. Hope our heroic grandfathers and grandmothers can live healthy and fulfilling lives. The younger generations are proud of you."

In the pictures, Guan was on an open top bus full of veterans and family representatives of deceased war heroes.

Before retiring, Guan was the director of the commanding office at the Beijing division of the People's Armed Police Force.

"Before our formation could reach Tian'anmen Square, I was already on the brink of tears," Guan later told Xinhua.

Guan said spectators lined both sides of the street all the way from his hotel to Tian'anmen Square, chanting "salute to old heroes, learn from old heroes."

Guan's emotions reached a peak when he arrived at the Beijing landmark and heard the Ode to the Red Flag, a stirring symphony composed by noted musician Lyu Qiming in 1965 to commemorate the sacrifice of the Chinese people for the new people's republic.

"I am not a war hero, nor have I fought in the fires of battle," Guan said.

However, many of his close friends and comrades were revolutionaries who are now dead.

"The thought of my friends not being alive to see this age of prosperity, my eyes just can't stop crying," he said.

"Our nation is now rich and our military is strong. My deceased comrades did not witness this development, but I did. So I have to salute them."

Guan joined the military at age 16 in August 1949. Due to his short height and small frame he was almost discharged.

"I implored my company commander, promising him I would put on some muscle and weight in two months," he said.

"In many of the following national anniversaries, I was placed under logistics and guard duties with many of my comrades," he said.

Guan said many of his colleagues in the mid-20th century were illiterate, so despite only having a middle school education, he read and wrote letters for friends and eventually began delivering briefings between government officials.

Noncombat roles may not require fighting, but they are still crucial for military operations and require the upmost professionalism and discipline, he said.

In his diary entry on the nation's 70th birthday, Guan wrote that the younger and the older generations should work together to improve and reinvigorate the nation.

"Don't forget why you started despite old age. Keep spirits high and contribute to society for the remainder of your life," he wrote.