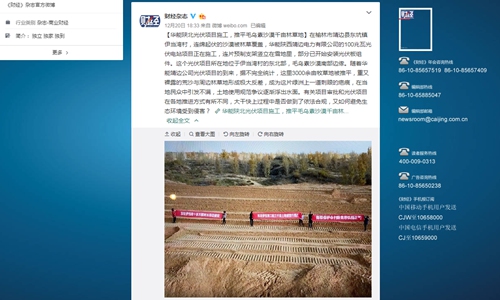 A photovoltaic project in Northwest China's Shaanxi Province has been suspended for allegedly flattening more than 218 hectares of forest and grassland, local authorities said Saturday.

The Natural Resources Bureau in Jingbian county in Yulin ordered China Huaneng Group to suspend the project, according to a statement from Jingbian officials on Sina Weibo.

The photovoltaic power plant is located along the southern edge of the Mu Us Desert at the border of Shaanxi and North China's Inner Mongolia Autonomous Region. Local residents had spent great efforts transforming this section of the desert into a grassland oasis.

China Huaneng Group on Saturday issued a statement that said they are reviewing the site selection, land use, and environmental assessment reports and will handle the case strictly and punish those responsible for committing any violations or breaking regulations throughout the project's development.

In May, the company started cutting down trees which dissatisfied villagers and stirred controversy over the authority's approval of the project from 2017, and also the legitimacy of the change in land use, Caijing reported.

Villagers said they weren't compensated for the destroyed grassland and sent a signed complaint letter to the local Public Security Bureau requesting punishment for the company's destruction.

The company allegedly obtained a timber harvesting permit for more than 2,400 trees in June, but had cut nearly 100,000 trees by September, villagers told the magazine.