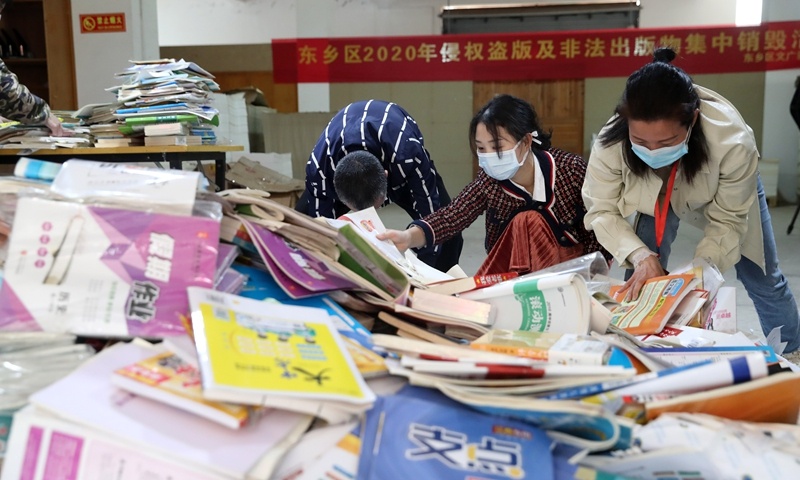 Over 4,500 pirated books were destroyed at a printing shop in Fuzhou, East China's Jiangxi Province on April 23, 2020. (Photo: VCG)

Pirated books sold on China's e-commerce platform Pinduoduo exposed by a social media article brought the piracy issue of books back into the media spotlight recently.

The editorial office of the WeChat public account Young Caijing exposed in its article that over 500 books it purchased on China's e-commerce platform Pinduoduo turned out to be pirated ones.

Young Caijing complained to the online bookshops but only received a reply saying that they could be refunded, while the Pinduoduo platform replied that pirated books are not counterfeit products.

The reply from Pinduoduo was ridiculed by internet users on China's Twitter-like Sina Weibo with some commenting that the books are genuine pirated books, not counterfeit pirated books.

According to Young Caijing, the total price of the books was around 8,100 yuan ($1,246), only 30-40 percent of the price of the genuine copyright versions published by nearly 150 publishing houses. However, all online bookshops described their books as genuine versions with copyrights.

Many renowned writers are involved, including Zheng Yuanjie, known as the "king of children's stories," as well as the author and publisher of King of the Fairy Tale, China's first popular fairy tale magazine, who wrote classical children's stories about Pipi Lu and Lu Xixi, two iconic twins.

In July 2018, Zheng reported pirated books of his works sold on Pinduoduo to the National Copyright Administration and the National Office for the Fight Against Pornography and Illegal Publications. The platform said it would deal with the piracy problem with Zheng through negotiation.

Among the 12,573 judgments related to Pinduoduo published on China Judgements Online, about 5,100 judgments involved intellectual property or copyright infringements. Pinduoduo's self-defense is that there are over 5 million shops on its platform and it has no ability to review all of them.

However, a staffer from a publishing house in Hangzhou, East China's Zhejiang Province told the Global Times on Tuesday that although her company has taken measures to protect its rights, booksellers can just change multiple sock puppet accounts to continue their illegal activities.

She thinks it still has to rely on the authorities to fight against piracy, which severely infringes on the rights and interests of consumers, publishing houses and the writers, with severe punishments.

In recent years, law enforcement departments around the country have intensified their efforts to crack down on pirated books.

Shanghai police cracked down on a criminal chain of pirated books last December, with over 260,000 copies of pirated books involving a variety of categories such as children's literature, popular science and encyclopedias, and picture books published by over 100 publishing houses confiscated, Shanghai Morning Post reported. The amount of money involved amounted to over 15 million yuan and six suspects were caught.