A railway linking Mafang of Pinggu district and the Tianjin Port opened on Monday, as the district in northeastern Beijing aims to build a logistics hub in the Beijing-Tianjin-Hebei region during the 14th Five-Year Plan period (2021-2025). 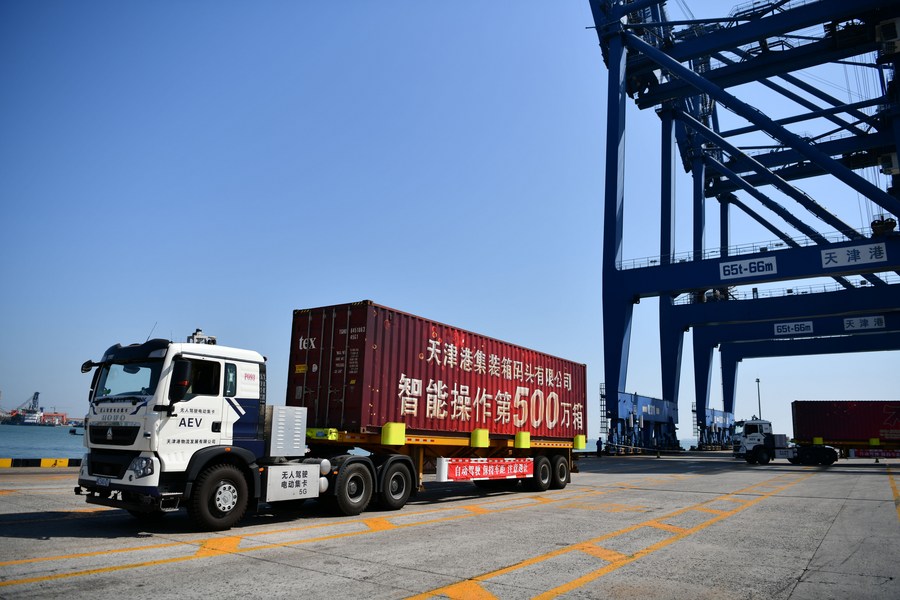 The driverless electric container truck loaded with containers heads for the dock at the Tianjin Port in north China's Tianjin, Sept. 26, 2019. (Photo: Xinhua)

Previously, transportation between the Tianjin Port and Pinggu relied on highways, but heavy trucks have a limited capacity and are prone to produce pollutants.

The Tianjin Port, a major port in the Beijing-Tianjin-Hebei region, has 130 container lines and maintains trade links with more than 800 ports across the globe. The newly opened railway signals the launch of a sea-railway combined transportation route between Pinggu and the Tianjin Port, said Xu Xubo, vice president of Tianjin Port (Group) Co. Ltd.

Rail transport takes 4.5 hours from the Tianjin Port to Mafang, and Beijing's imported and exported goods can be directly declared in Mafang, saving time for merchants.

Currently, the dual transportation route is in a trial phase. In the future, goods going through the route will mainly be food, fruit, and other life necessities that serve the needs of the capital city, according to officials of Pinggu district.