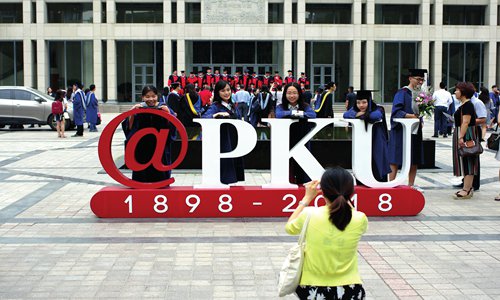 Peking University (PKU) on Sunday announced they would accept the enrollment of two students from Central China's Henan Province that they previously rejected due to their relatively low score on the national college entrance examination.

"The two students meet our enrollment standards and will be accepted as our new students," the university announced on Sina Weibo on Sunday afternoon.

"Our previous rejection was irregular and we decided to admit the two candidates."

The announcement came after local media beginning around August 6 reported the university rejected two Henan students although they met PKU's enrolling requirement in Henan under a governmental "national special project."

There may be students with higher scores, but a rule is rule and the university cannot violate it, an Peking University professor who asked for anonymity told the Global Times on Sunday.

Issued in 2012, the project aims to improve access for students from poor areas to high-quality university education.

Through the plan, Peking University has an enrollment plan for eight science students in Henan this year but the seventh and eighth candidates' college entrance scores were less than 600/720, far behind the other six candidates.

Before agreeing to accept the two students, Peking University reportedly asked three times for the students to drop out as they lacked the ability to catch their peers and handle with the tough science and engineering courses at the university.

Henan agreed to replace the two students with two others with higher scores, media said.

Some netizens agreed with the PKU questioning that giving priority to these students would be unfair to those with higher scores.

But Xiong Bingqi, deputy director of the Shanghai-based 21st Century Education Research Institute, told the Global Times that as "the two students met all the admission requirements through the plan. Peking University has no adequate reasons to reject them."