CHINA PLA Air Force to perform in Singapore despite epidemic

PLA Air Force to perform in Singapore despite epidemic 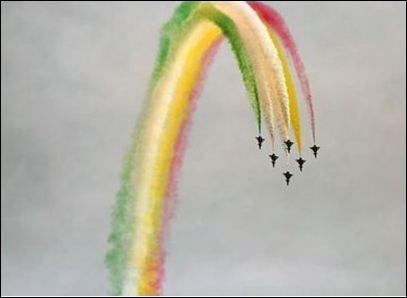 An aerobatic team of the Chinese Air Force will perform at a Singaporean air-show as scheduled despite the coronavirus outbreak, while Singapore did not quarantine Chinese pilots who arrived in the country on Wednesday, a move shows its high level of trust in China's epidemic control measures.

On the invitation of the Singaporean side, the Chinese Air Force's August 1st Air Demonstration Team will perform at the 2020 Singapore Airshow from Feb-ruary 11-16, as nine aircraft, including seven J-10 fighter jets that will be fea-tured and more than 100 personnel, arrived in Singapore on Wednesday, ac-cording to statements released by the Chinese Air Force and the Defense Minis-try.

Despite the ongoing coronavirus epidemic, which has seen 99 countries and re-gions including Singapore taking immigration control measures, no change was seemingly made to the Chinese flight performance plan.

After the Chinese pilots arrived on Wednesday, they started training for the performances without being quarantined, a source told the Global Times, not-ing that this showed Singapore's high level of trust in China's epidemic con-trol measures, which runs in contrast to some Western countries' moves.

For every flight, pilots have to undergo health checks and anyone found to be sick will not be allowed to fly at all, Fu said.

At a time when China is fighting the virus outbreak, the performances of the August 1st Air Demonstration Team in Singapore will showcase the Chinese military's confidence, analysts said.

The Singapore Airshow is a good chance to show China's epidemic control measures, and let the world see the Chinese speed and spirit from the Chinese pilots up close, Fu said.

The August 1st Air Demonstration Team, or Bayi Aerobatic Team, is considered China's "honor guard of the sky," a window of military communication and an envoy of peace and friendship.

This is the first time the team will be participating in the Singapore Airshow.

At least 15 exhibitors have pulled out of the Singapore Airshow due to the coronavirus outbreak, such as South Korea's Black Eagles Air Demonstration Group, media reported.

As many exhibitors retreat from the Singaporean event, the August 1st Air Demonstration Team's arrival should also be considered a strong sign of sup-port for Singapore, analysts said.

Chinese and Singaporean military relations have been good since 2019, as the two countries signed an upgraded version of the Agreement on Defense Ex-changes and Security Cooperation in October.

Singapore Prime Minister Lee Hsien Loong said on Saturday at a Chinese New Year Celebration event that Singapore is confident that China and other coun-tries will work together to win the battle against novel coronavirus, the Xinhua News Agency reported.