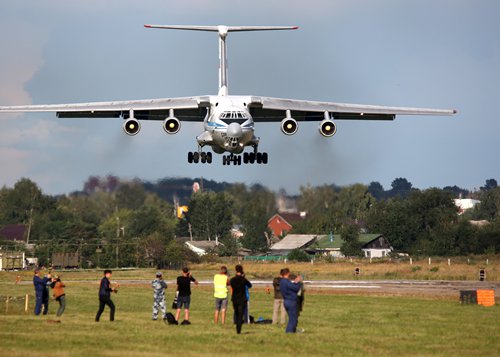 The Chinese People's Liberation Army (PLA) Air and Naval Aviation force will participate in the Aviadarts competition as a part of the International Army Games 2019 to be held in Russia. This is a first for the two forces to combine into one team on the international stage, Xinhua News Agency reported.

Eleven PLA Air Force aircraft and two PLA Navy aircraft arrived at Dyagilavo Airfield, Ryazan State, on Friday for the games that commence August 3 for 10 countries including China and Russia.

Aviadarts 2019 Competition will be held at the Dubrovichi test range outside Ryazan, Russia, said Dong Li, vice chief of staff of the PLA Air Force.

The air force and naval air force participated in the bombing aircrew project competition, the first time that China's air force and navy competed with armed forces of other countries at the international arena, Dong said.

Dong suggested that as China's military reform deepens, exchanges between military services have been increasing.

The cross-border joint exercise of the PLA Air Force and PLA Naval Aviation shows the PLA is capable of combining forces to carry out missions abroad.

It also shows the level of joint air and naval training has improved, Dong was quoted as saying by Xinhua.

The international competition will be hosted by 10 countries including Russia, China and Kazakhstan. A total of 216 teams from 34 countries are expected to compete in 32 contests of which 16 programs will involve the Chinese military force.

Delegations from the PLA Army, PLA Navy and PLA Air Force will head for five countries to participate in 11 competitions.