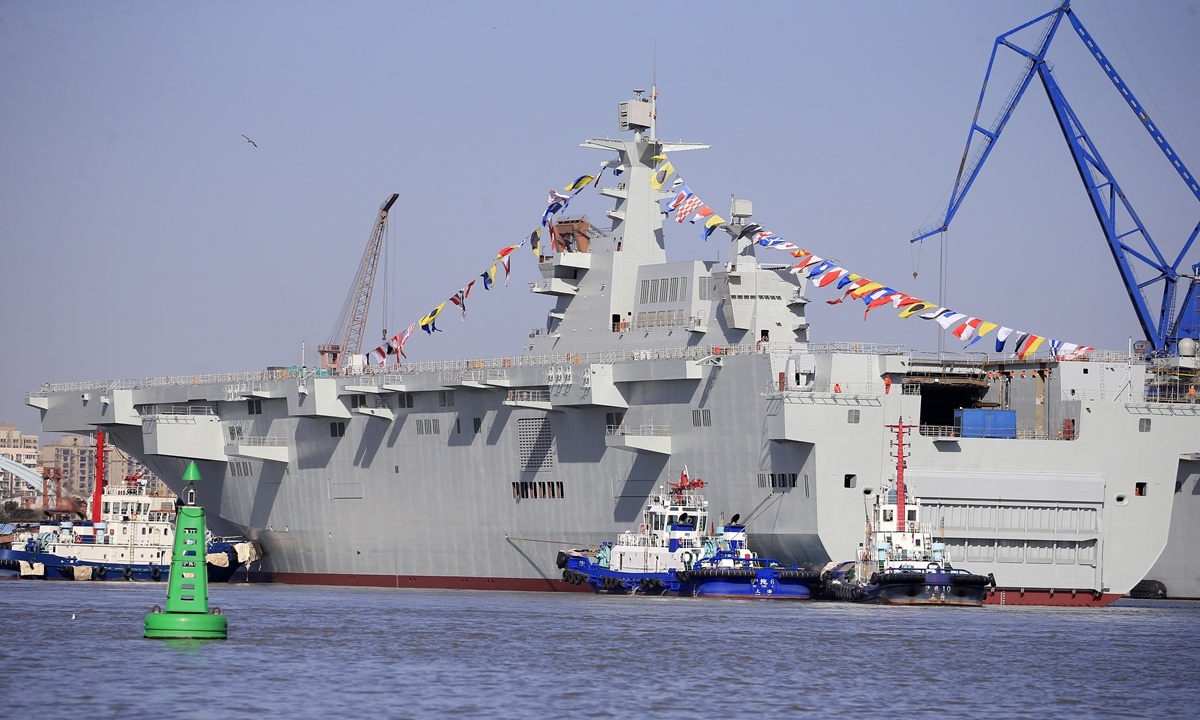 China's third Type 075 amphibious assault ship was launched from the Hudong-Zhonghua Shipyard in Shanghai on January 29, 2021. Many military enthusiasts gathered to witness the launch, and were amazed with the second and third Type 075s now both moored by the Huangpu River bank for further outfitting work. (Photo: Global Times)

The Hainan, the first Type 075 amphibious assault ship of the Chinese People's Liberation Army (PLA) Navy, recently staged a helicopter aviation drill, and for the first time revealed its interior in a state broadcast report on Tuesday, showing that the warship is rapidly gaining operational capability, and the PLA is confident in its performance, analysts said.

Since its commissioning on April 23, the Hainan has been conducting advanced ship-aircraft integration training, which is an indication that the warship is forming operational capability very fast, observers said.

More diverse helicopters will conduct aviation adaptation training on the Hainan in the near future, CCTV said.

In addition to the 13 ton-class Z-8 helicopters, ship-borne variants of the 10 ton-class Z-20 utility helicopter and armed reconnaissance helicopter drones could become some of the main aviation equipment of the Type 075, Shi Hong, executive chief editor of the Chinese magazine Shipborne Weapons, told the Global Times.

In a rare move, the Hainan revealed some details of its interior, including the dock used to carry landing craft air-cushioned and landing craft utility, the vehicle hangar used to store tanks and amphibious armored vehicles, the helicopter hangar used to host helicopters, the flight deck at the top, and the elevators that connect them.

A slogan on the wall of the hangar reads, "The victory of the landing troops is our victory."

Introducing the insignia of the Hainan, Captain Lü Yongjun was quoted as saying that its design reflected the elements of joint operations, featuring the amphibious assault ship, the ship-borne helicopters, air-cushioned craft and armored vehicles.

Besides the amphibious combat capabilities, the Hainan is also equipped with missiles, guns and electronic warfare systems, which give it a strong defense capability, the report said.

When it comes to navigational performance, Lü said that the Type 075 is well designed, and despite its large size and displacement, it feels easy to steer.

Both the detailed revelation of the ship's interior and Lü's statement showed the PLA's confidence and satisfaction with the Type 075, and from another perspective, sent another warning to the Taiwan secessionists, analysts said.

Assigned to the PLA South Sea Fleet, the Hainan could conduct missions involving not only the South China Sea but also the island of Taiwan, military expert and TV commentator Song Zhongping told the Global Times.

The commissioning of the Hainan will "provide powerful support to safeguarding national sovereignty, security and development interests," Captain Zhou Yandong, the political commissar of the Hainan, was quoted in the CCTV report as saying.

Just like aircraft carriers, the Hainan is named after a Chinese province and given a two-digit hull number - 31 - which is an indication of the amphibious assault ship's important role and honored duty, Zhou said.

Two more Type 075s have been launched and are expected to join the PLA Navy soon.