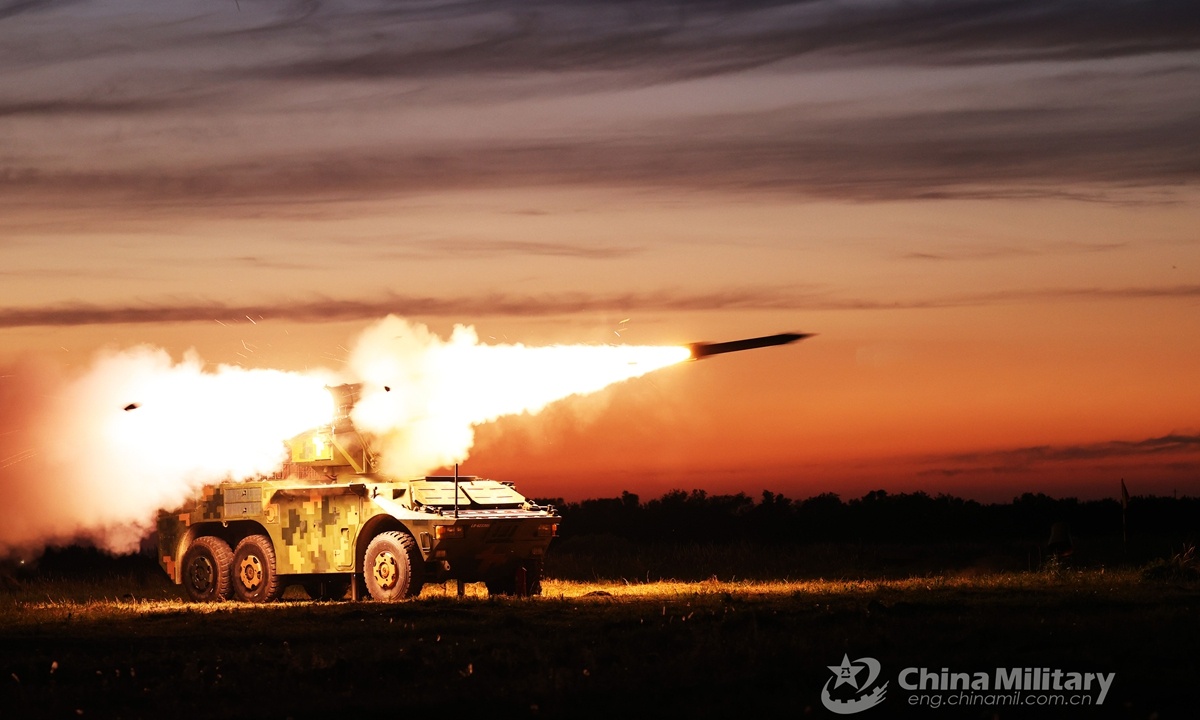 An armored vehicle assigned to the missile element assigned to a brigade under the PLA 80th Group Army fires the missile during a live-firing assessment on May 17, 2021. (Photo: China Military)

Multiple PHL-03 long-range multiple rocket launcher systems were mobilized to the shore, as the troops conducted long-range reconnaissance via drones and launched multiple rockets at targets in a calculated manner so the rockets impacted simultaneously and intensively, and suppressed the targets, although the maritime targets were mobile and difficult to spot, CCTV reported.

The self-propelled launchers then quickly relocated and initiated another attack.

The troops tested multiple tactics and conducted combined strikes on targets, as the exercise further validated these methods and showed long-range multiple rockets are highly deadly to maritime targets, Captain Li Yu, a company commander at the brigade, was quoted as saying.

In a separate exercise, the PLA Army Academy of Artillery and Air Defense recently held a live-fire exercise, using the HJ-10 anti-tank missile system against maritime targets on the shore of the Yellow Sea, the Xinhua News Agency reported on Friday.

Both long-range rocket and anti-tank missiles are weapon types traditionally designed to strike ground targets, but the PLA Army showed that they are versatile and can also play roles in anti-ship missions, thanks to advanced technologies domestically developed by China's arms industry and the troops' skilled techniques and tactics, a Beijing-based military expert who requested anonymity told the Global Times on Sunday.

The Army can join the Navy, the Air Force and the Rocket Force in joint area denial tasks against hostile warships should they provoke close to China, and participate in landing and anti-landing operations, the expert said.

Earlier in May, a US destroyer, the USS Curtis Wilbur, first sailed through the Taiwan Straits in a provocative manner, then trespassed into China's territorial waters of Xisha in the South China Sea.

The US has been conducting close-in reconnaissance operations and exercises close to China more and more frequently over the past years, reports suggest.