Joining fighter jets and special mission aircraft, attack and transport helicopters of the Chinese People's Liberation Army (PLA) were spotted near the island of Taiwan in a drill for the first time on Tuesday, with military experts saying on Wednesday that choppers can provide more tactical options in landing operations, and this displayed the increased combat readiness of the PLA in the region. 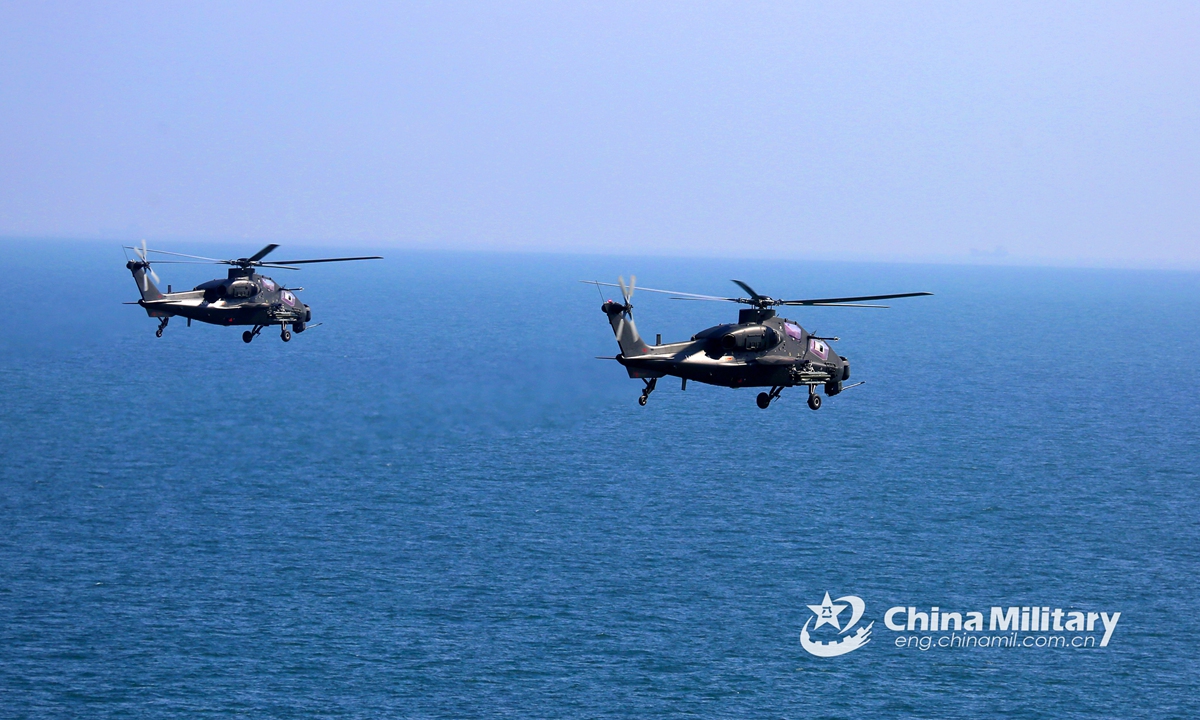 Two attack helicopters attached to an army aviation brigade under the PLA Eastern Theater Command fly in alongside formation above the sea at an ultra-low altitude during a flight training exercise on June 9, 2021. (Photo:China Military)

It was the first time a PLA attack helicopter joined such an exercise in the region since the island's defense authorities started to announce flight activities of the PLA on a daily basis, media outlets on the island said.

Despite having slower speeds and shorter ranges compared with fixed-wing aircraft, helicopters can take off and land vertically and hover, and this gives them special advantages in island and landing operations, Fu Qianshao, a Chinese military aviation expert, told the Global Times on Wednesday.

As a transport helicopter, the Mi-17 has a large capacity for personnel and vehicles, but does not have armament, so it needs an armed helicopter like the WZ-10 to escort it, Fu said. The partnership of the two makes sense, particularly when operating in high-risk areas, as the WZ-10 has high firepower, advanced sensors and avionics that make it capable of attacking both land and maritime targets, and even engaging in air-to-air combat for self-defense, according to Fu.

The appearance of PLA helicopters, in addition to a wide variety of fixed-wing aircraft near Taiwan, showed that the PLA's training intensity and combat readiness are increasing, and the region is within the PLA's grasp, Fu said.

In August, a PLA Z-9 anti-submarine warfare helicopter penetrated into the region for the first time, the island's defense authorities said at the time.

It is worth waiting to see whether the PLA Army Aviation Force will frequently join the exercises and patrols in the region, Fu said, noting that helicopters, despite their shorter ranges, can conduct cross-sea operations when operating together with vessels with helicopter decks.