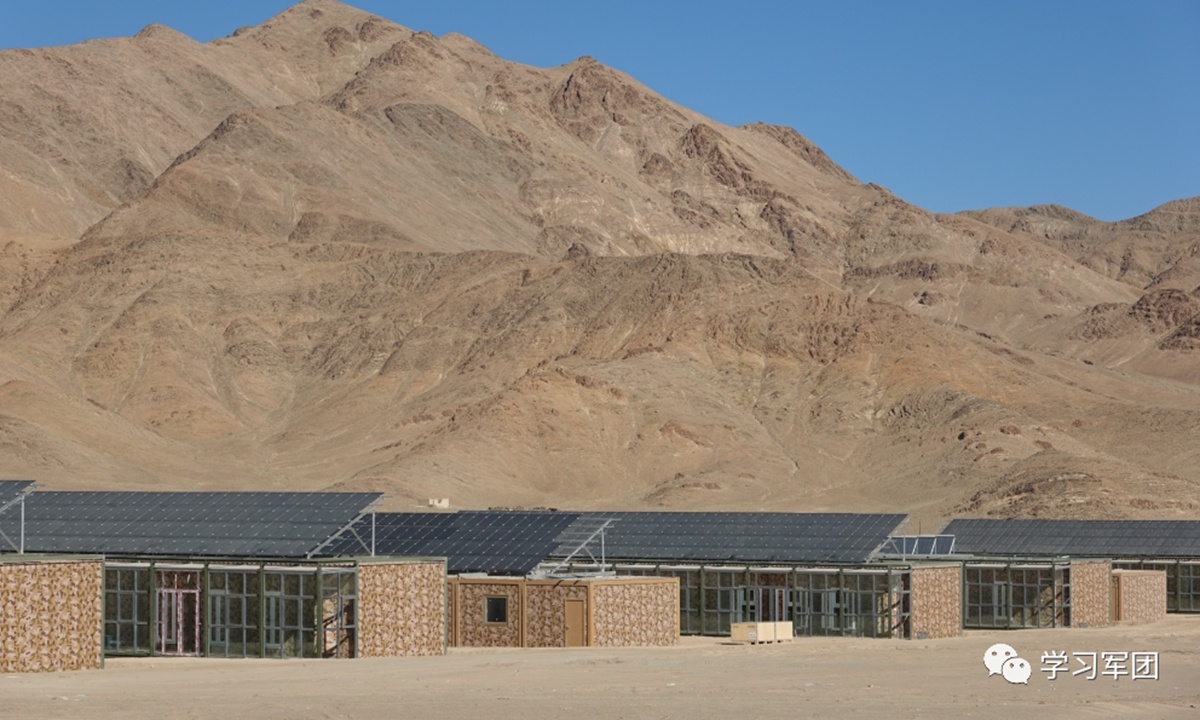 Chinese border troops stationed in plateau areas were recently equipped with assemblable thermal shelters,   which guarantee them to get through the chilly winter and support the military's combat readiness in extreme weather.

The use of thermal shelters comes amid the ongoing border tension between China and India,  with experts saying it will provide the Chinese military with reliable combat-readiness support in a long-term standoff with India during the harsh winter.

Developed by the Army Engineering University of the Chinese People's Liberation Army (PLA), the shelters - composed of dormitories, canteens, washing rooms, toilets, warehouses, microgrids and heating equipment - can function properly in temperatures as low as -55 C and an altitude of 5,500 meters.

The self-powered thermal insulation houses have already been used in a number of outposts in the plateau and alpine areas in the past two years, and border troops in the plateau are now officially equipped with them, according to the PLA Daily, citing the logistics support department of the Central Military Commission.

The prolonged standoff in the Chinese-Indian border region is a battle of endurance, logistical support and morale of soldiers, as tensions have shown no signs of easing, Qian Feng, director of the research department at the National Strategy Institute of Tsinghua University in Beijing, told the Global Times on Wednesday.

"This high-profile announcement of the use of the shelters will greatly raise the morale of PLA soldiers staying in the border regions and boost their resolution in the standoff," Qian said.

"The deployment of those shelters shows a preparation for all-round military struggle amid the escalating tensions on the China-India border," Song Zhongping, a military expert and commentator,  told the Global Times. The equipment is flexible in its application and can be assembled according to the scale of the troops.

The deployment of the assemblable thermal shelters enables troops to carry out any missions as it can be put into use at any time, largely reducing reliance on long-distance fuel distribution, according to the PLA Daily.

Even without water and electricity, the shelters can be installed normally and its structure and interior space can be adjusted as needed. More than 90 percent of the components can be reused, said the report.

The integrated photovoltaic microgrid can achieve energy self-sufficiency. Even with outdoor temperatures at -40 C, the indoor temperature can be maintained at above 15 C. Diesel heaters can ensure emergency heating in the event of long-term rain and snow.

To adapt to the extreme weather conditions, PLA soldiers on border patrol have also been equipped with new high-tech clothes, such as cold-proof hoods, warm training clothes and lightweight cold-proof training coats, which can help them better carry out tasks.

The weather and terrain in Ladakh are major challenges when it comes to large-scale military operations, which require smooth and quick logistical support and medical supplies. Amid the continuing bilateral talks, the border standoff will likely remain the status quo, Qian noted.

India and China are scheduled to hold the 7th military commanders meeting on October 12 in Ladakh.