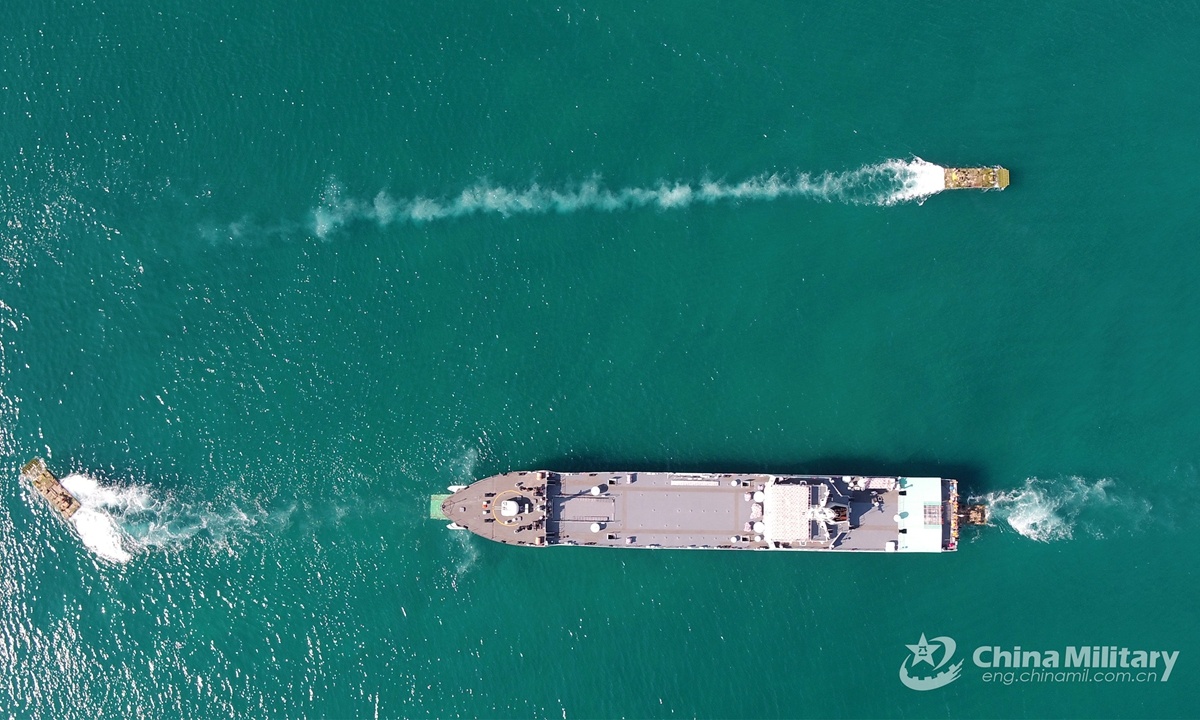 Amphibious armored infantry fighting vehicles (IFVs) steer on and off a landing ship during the several-week-long realistic combat training jointly conducted by a naval landing ship flotilla under the PLA Southern Theater Command and a combined arms brigade under the PLA 74th Group Army in mid-May, 2021. (Photo: China Military Online)

To enhance the combat performance of combined arms battalions at sea and the amphibious capabilities of army troops, a combined arms brigade under the PLA 72nd Group Army recently conducted an exercise in the waters off South China's Fujian Province, where it practiced the loading and unloading of equipment and supplies to landing ships and steering of amphibious vehicles at sea, the PLA Eastern Theater Command announced in a statement on Monday.

As part of the exercise, wheeled amphibious armored vehicles entered the dock of amphibious landing ships, which then sailed to a target sea area, before the vehicles left the ship and steered toward the beach, a video released with the statement showed.

Multiple landing ships carried several types of equipment, including tracked armored vehicles, wheeled off-road assault vehicles and trucks, in the exercise, according to the CCTV report.

By constantly training under complicated sea situations and amphibious battlefield environments, the troops can better integrate their performance with weapons and equipment. The exercises built a concrete basis and would play a decisive role in possible future combats, Song Zhongping, a military expert and TV commentator, told the Global Times on Tuesday.

The announcement of the exercises came only a few days after the US' latest provocation of landing a military transport aircraft on the island of Taiwan to bring three senators for a so-called three-hour vaccine aid visit.

The two events are not necessarily connected, but since military exchanges between the US and the island of Taiwan have been increasing and are expected to continue to increase, the PLA is also enhancing its combat readiness against Taiwan secessionists and those behind them, Song said.

The PLA's exercises aim to win wars, and to resolve the questions of national unity and territorial integrity, Song said.