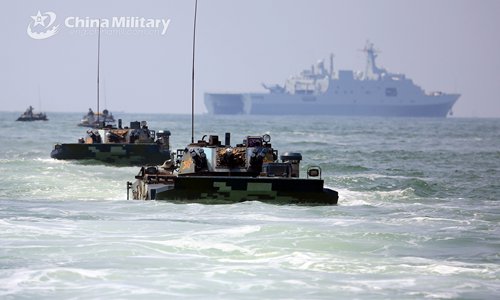 Amphibious armored vehicles attached to a brigade of the PLA Navy Marine Corps make their way to the beach-head during a maritime amphibious assault training in the west of south China's Guangdong Province on August 17, 2019. (Photo: eng.chinamil.com.cn)

The Chinese People's Liberation Army (PLA) recently conducted a joint land assault exercise featuring multiple military branches near the island of Taiwan, which military experts said on Sunday shows the Chinese military is ready to unleash its full potential against Taiwan secessionist forces and intends to send a stern warning to countries that intervene in China's internal affairs.

The 74th Group Army of the PLA recently held a joint land assault exercise off the eastern coast of South China's Guangdong Province, with the navy and air force joining the simulated attack, China Central Television (CCTV) reported on Thursday.

Led by the navy's amphibious assault ships, with additional air support, a combined arms brigade of the army launched a joint assault on a coastal area.

Navy minesweepers and obstacle breaking boats first cleared a path through the sea, and amphibious assault vehicles of the army stormed to the coast from multiple directions.

As the army closed in on the coast, warplanes, artilleries and tanks launched simulated joint strikes from multiple points and successfully seized the position.

While the defending team attempted counterattacks, the army called in air strikes from a communications command platform, guiding fighter aircraft and long-range rockets that eliminated the defender's threat.

"We upgraded our system so that battlefield data can be shared in real time. Intelligence gathered by the navy, air force and ourselves on the battlefield can be reported to the command center, and shared between basic units," Liu Shuyi, staff officer of the combined arms brigade, told CCTV.

Joint operations are essential in modern warfare, especially during landing missions, which are usually complicated as defenders usually have the advantage, an anonymous military expert told the Global Times on Sunday.

The PLA used to conduct exercises within single military branches during which the army, navy and air force were trained on their own, the expert said, noting that joint training exercises could help the PLA make the best of its full potential.

Although the report did not identify an imaginary enemy for the exercises, Chinese internet users noted the location of the exercises was close to the island of Taiwan.

After the US approved a plan to sell $2.22 billion worth of tanks and missiles to the island in July, the PLA also conducted military exercises off the coast of Guangdong.

The US went on to approve an $8 billion sale of fighter jets to the island in August, military analysts predicted at that time that a new round of military drills was likely to follow.