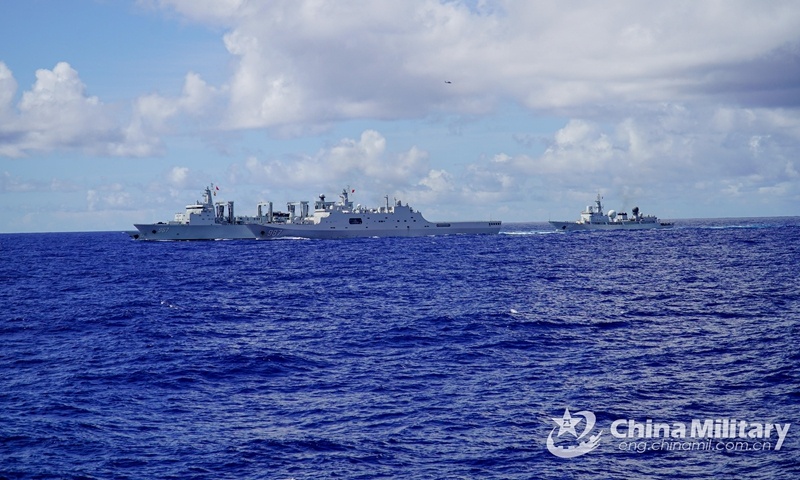 Three warships attached to a naval flotilla under the PLA Southern Theater Command, including the amphibious dock landing ship Wuzhishan (Hull 987) and comprehensive supply ship Chaganhu (Hull 967) , steam in formation during a combined arms training exercise. The flotilla under training has traveled more than 8,000 nautical miles in over 30 days, conducting dozes of training items including air and missile defense, anti-terrorism and anti-piracy operation, and joint search and rescue. (Photo: China Military Online)

Two days after monitoring a provocative US warship transit in the Taiwan Straits, Chinese People's Liberation Army (PLA) forces drove away the same US vessel which intruded Chinese territorial waters in the South China Sea on Thursday. as the US move was deemed an act of navigational hegemony and public opinion manipulation that seriously violated China's sovereignty and safety and risked misjudgment and accidents.

The two recent US warship activities were related and intentionally planned, analysts said, noting that the PLA's consecutive responses also demonstrated that it is fully prepared to fend off any provocations.

Without authorization from the Chinese government, the guided missile destroyer USS Curtis Wilbur illegally trespassed into China's territorial waters of Xisha on Thursday, and the PLA Southern Theater Command organized maritime and aerial forces to track and monitor it and warned it away, Senior Colonel Tian Junli, spokesperson of the command, said in a statement.

The US military's claim that it was not "expelled from any nation's territory" is a confusing statement that intentionally leads the public to focus on "expelled or not," military experts pointed out.

"USS Curtis Wilbur was not 'expelled' from any nation's territory" that the US 7th Fleet stated, which emphasizes "expel" while ignoring the specific location "on the territory of any country," is an attempt to confuse the public and diverting the focus, experts said. The US military intended to create the impression that Curtis Wilbur was driven away by the PLA's warning in "international waters" instead of "the territorial waters of any country," experts analyzed.

In the deep-rooted mentality of the US military, it always denies China's sovereignty over the Xisha Islands, and refuses to recognize the baseline of the territorial sea of the islands. In this case, the US military does not believe it entered China's territorial sea and remained in "international waters," experts said.

The US military's move is an often-used trick of "mixed manipulation" of navigational hegemony and public opinion misleading, which seriously violated China's sovereignty and safety, and severely harmed peace and stability in the South China Sea, Tian said. "We are firmly against this."

It went against international law and basic principles in international relations, purposely added regional security risks and could have triggered misjudgment and maritime accidents, Tian said, noting that it was unprofessional and irresponsible, and showed the US is the real "security risk maker in the South China Sea."

China should not only take proper military countermeasures, but also expose more of the US' unreasonable and hegemonic moves to the international public, and let the world know the US military's true face, Zhang Xuefeng, a Chinese military expert, told the Global Times on Thursday.

The command forces are always on high alert to resolutely safeguard China's sovereignty, safety and peace and stability in the region, Tian said.

On Tuesday, the same US warship also sailed through the Taiwan Straits, and its entire course was tracked and monitored by the PLA Eastern Theater Command.

Senior Colonel Tan Kefei, a Chinese Defense Ministry spokesperson, said in a statement on Thursday that the US warship's Taiwan Straits transit and Xisha waters trespass are serious provocative activities that are very vile in nature.

The Taiwan question is a Chinese internal affair which is important to China's sovereignty and territorial integrity, and it is the most important and sensitive question in China-US relations, Tan said, noting that the Xisha Islands are Chinese territories and the Chinese government announced Xisha Islands' territorial sea baseline in 1996.

According to the monitoring of the South China Sea Strategic Situation Probing Initiative (SCSPI), a Beijing-based think tank, the US warship transited the Taiwan Straits on Tuesday from north to south, and the US has done so many times in the past when an incursion of Chinese territorial waters off the Xisha Islands followed such a Taiwan Straits transit, observers said.

The USS Curtis Wilbur's latest run is yet another planned provocation on China and stirs up trouble in both the Taiwan Straits and South China Sea, a Chinese military expert who preferred to remain anonymous told the Global Times on Thursday.

Both events were rapidly responded to by the well-prepared PLA, and the US military movements were kept in check, the expert said.