CHINA PLA flies aircraft to Taiwan, both US and Taiwan military activities targeted

PLA flies aircraft to Taiwan, both US and Taiwan military activities targeted

For the eighth time in June, the Chinese People's Liberation Army (PLA) reportedly sent military aircraft to Taiwan's southwestern "airspace" on Friday. Chinese mainland military experts said the regular exercises are beginning to show strategic significance, as they are not only aimed at intercepting US military aircraft flying through the area or sending messages to Taiwan secessionists, but also serve as practical trainings, with the aim of gathering military information from Taiwan, and suppressing potential US and Japanese reinforcements coming from the Miyako Strait and Bashi Channel. 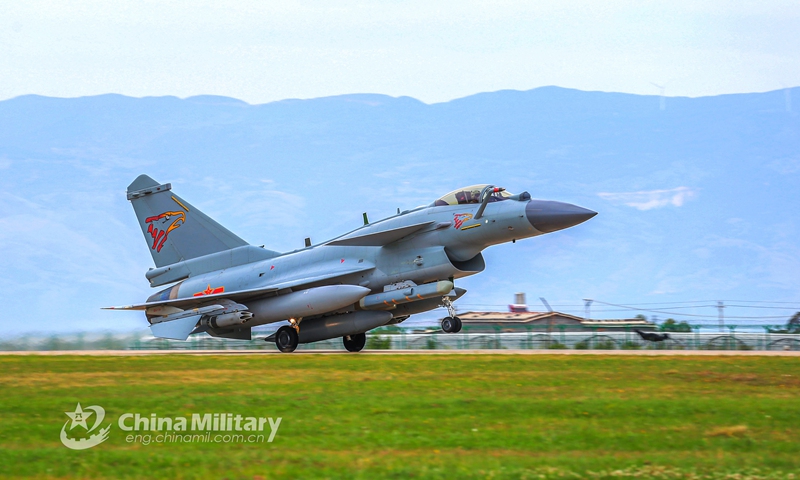 A J-10 fighter jet attached to an aviation brigade of the air force under the PLA Southern Theater Command takes off from the runway for a flight training task on May 20, 2020. (Photo:China Military)

The PLA military aircraft were spotted entering Taiwan island's southwestern "airspace" on Friday, Taiwan media reported on the same day, citing a statement by a spokesperson of the island's defense authority. It did not specify the type of PLA aircraft.

Taiwan's media outlets also noted that shortly before the PLA's excursion, the US military sent an EP-3E signals reconnaissance aircraft to the same area, which made its way through the Bashi Channel, before heading toward the South China Sea "in search of PLA submarines."

Song Zhongping, a Chinese mainland military expert and TV commentator, told the Global Times on Friday that the PLA aircraft likely took its specific route to track and intercept the US warplane.

Since the start of June, the PLA had conducted eight similar excursions, using a variety of aircraft including the J-10, J-11, and Su-30 fighter jets, and Y-8 special mission aircraft, according to information released by Taiwan's defense authority.

In many of these operations, US military aircraft were also spotted near the island of Taiwan, and military analysts added the PLA has routinized these types of operations to intercept US aircraft and increased the PLA's presence in the area.

The operations could mean that the PLA is training to suppress the potential US and Japanese reinforcements coming from Guam and Ryukyu Islands through the Miyako Strait east of Taiwan and through the Bashi, Balintang, and Babuyan channels southwest of Taiwan, Song said, adding that the PLA could use these operations to effectively lockdown the area from foreign forces while ensuring that Taiwan's forces cannot escape.

Taiwan has naval and air force bases in its southwest, and with the island's annual Han Kuang exercise quickly approaching, Song said the PLA aircraft could continue these exercises for reconnaissance purposes, and to monitor Taiwan military's movements and gather intelligence on its weapons.