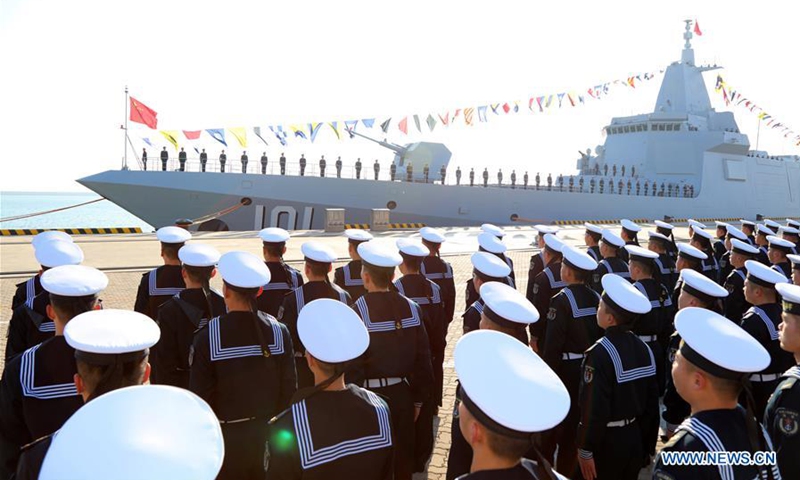 Photo taken on Jan. 12, 2020 shows the ceremony of the commissioning of the Nanchang, China's first Type 055 guided-missile destroyer, in the port city of Qingdao, east China's Shandong Province. The commission of Nanchang marks the Navy's leap from the third generation to the fourth generation of destroyers, according to a statement from the Navy. (Photo by Li Tang/Xinhua)

A naval flotilla belonging to the Chinese People's Liberation Army (PLA) that crossed multiple strategic sea lanes near Japan and sailed near US waters since August has reportedly returned to the East China Sea recently, displaying the PLA Navy's strong far sea capabilities that can break the so-called island chains that the US hoped to contain China, observers said on Wednesday.

The Japan Maritime Self-Defense Force on Saturday spotted a PLA Navy flotilla consisting of four warships, identified as the Type 055 destroyer Nanchang, Type 052D destroyer Guiyang, a Type 903A supply ship with the hull number of 903, and a surveillance ship with the hull number of 799, which then passed through the Osumi Strait and headed west into the East China Sea, according to a press release Japan's Ministry of Defense Joint Staff published on its website on Tuesday.

The PLA flotilla's return came after it entered the Sea of Japan from the Tsushima Strait on August 22, then crossed the Soya Strait and entered the Pacific Ocean on August 24. The US Coast Guard later spotted the PLA warships in international waters off the coast of the Aleutian Islands in Alaska on August 29 and 30.

Having passed through a number of key strategic sea lanes near Japan and sailing for nearly a month in distant waters as far as close to the US, the flotilla led by China's most powerful destroyer, the Type 055, reflects the PLA Navy's rapid development in far sea operations, a Chinese military expert told the Global Times on Wednesday, requesting anonymity.

Another PLA flotilla consisted of three destroyers sailed through the Miyako Strait and then returned from the waters between Island of Taiwan and Yonaguni Island in early September, Japan's Ministry of Defense Joint Staff said in a separate press release.

It again showed that the so-called island chains that the US hoped would contain China, particularly the first island chain, are now broken, the expert said.

At a time shortly after the US rallied its deputies including Japan, the UK, Australia and India for joint exercises targeting China, the PLA Navy's exercises show that China is fully capable of safeguarding its national sovereignty and territorial integrity, fears no provocation, Shi Hong, the executive chief editor of the Chinese magazine Shipborne Weapons, told the Global Times in a previous interview.

Warships from the US have been making frequent incursions near China in the name of freedom of navigation, and the PLA voyages could be seen as a countermeasure and signal against the US actions of hegemony, Wei Dongxu, a Beijing-based military expert, told the Global Times.

With the rapid development of the PLA Navy, large Chinese warships will sail farther in the Pacific Ocean, Indian Ocean and the Atlantic, experts said.