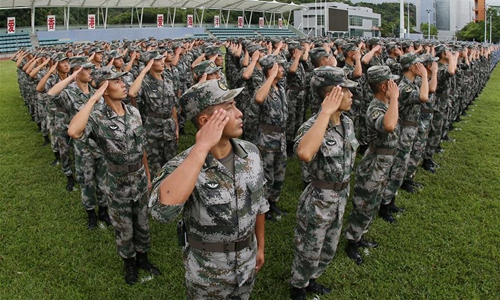 The Hong Kong garrison of the Chinese People's Liberation Army has the determination, confidence, and ability to fulfill its responsibility endowed by the Basic Law and Garrison Law; and will strongly safeguard Hong Kong's long-term stability and prosperity, spokesperson of China's Ministry of National Defense (MOD) said on a Thursday briefing.

Ren Guoqiang, spokesperson of MOD made the remarks when asked if the troops would take measures to subdue riots in Hong Kong. Ren said that the PLA Hong Kong Garrison is always ready to follow orders from the Central Committee of the Communist Party of China and the Central Military Commission.

Regarding the garrison's previous cleaning up of mess on the road left by rioters, Ren said such a move did not violate the Law of the PRC on Garrisoning the HKSAR and "one country, two systems" principle.

The garrison's participation in clearing roadblocks was a voluntary act, said Ren, noting that it was also in line with the voluntary tree planting, voluntary blood donation, old age, and child care activities carried out by the garrison in Hong Kong for many years, which reflects the garrison's care and love for people in Hong Kong.

He said the garrison has been firmly safeguarding Hong Kong's long-term stability and prosperity, which won itself wide praise.

According to videos circulating on social media, residents in Hong Kong paid homage and applauded garrison soldiers when they went out to clean the barricades earlier this month.

The caption read "You were just a good-looking young boy or girl in your hometown in 2017, and you joined the army in 2019. The uniform not only makes you look valiant; it also represents your mission and responsibility. Understand, soldiers?"

The garrison's social media posts also won support from netizens who said they were the most impressive posts they had ever seen during the challenge.

"Look at those young faces, they are covered in mud and sweat in order to protect the country's dignity. They are the most adorable people," wrote a Sina Weibo user.

For the PLA Hong Kong garrison, 2017 is a special year. Chinese President Xi Jinping, also general secretary of the Central Committee of the Communist Party of China and chairman of the Central Military Commission, inspected the garrison on June 30, 2017, on the eve of the 20th anniversary of Hong Kong's return to China.

Netizens also expressed their gratitude to the garrison on Thursday, Thanksgiving Day, for being the "anchor" of Hong Kong's prosperity and stability.

"It's been 22 years. Thank you PLA Hong Kong garrison, for safeguarding Hong Kong," wrote another netizen.

The garrison symbolizes China's sovereignty and is the final defense line of the city's political security, Fan Peng, a member of the Chinese Association of Hong Kong & Macao Studies, told the Global Times on Thursday.

Although it did not make any moves directed at rioters, its existence is "cardiac stimulant of Hong Kong people and strengthening of people's confidence in the city's future," Fan said.