BEIJING, Sep. 19 (ChinaMil) -- The third land-based unmanned system competition "Crossing Obstacles 2018" kicked off in Beijing on September 12. The competition is hosted by the Armament Department of the Chinese PLA Army and undertaken by the PLA Army Research Institute. 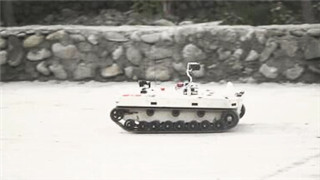 This year, the competition includes 44 competition events in ten categories, such as autonomous maneuver and reconnaissance in wild battlefield, air-ground coordinated search, and passage-opening in minefield. It highlights some of the typical combat styles such as close-range reconnaissance and mobile attack, and builds typical operational environments such as urban blocks, mountains and jungles, making it possible to simultaneously assess the key combat technologies and capabilities.

According to an official from the Armament Department of the PLA Army, the "Crossing Obstacles 2018" competition aims to promote the transformation and application of new scientific and technological achievements, link the technology development of land-based unmanned system and its application in the actual combat, and provide technological support for the PLA Army’s transformation and development.