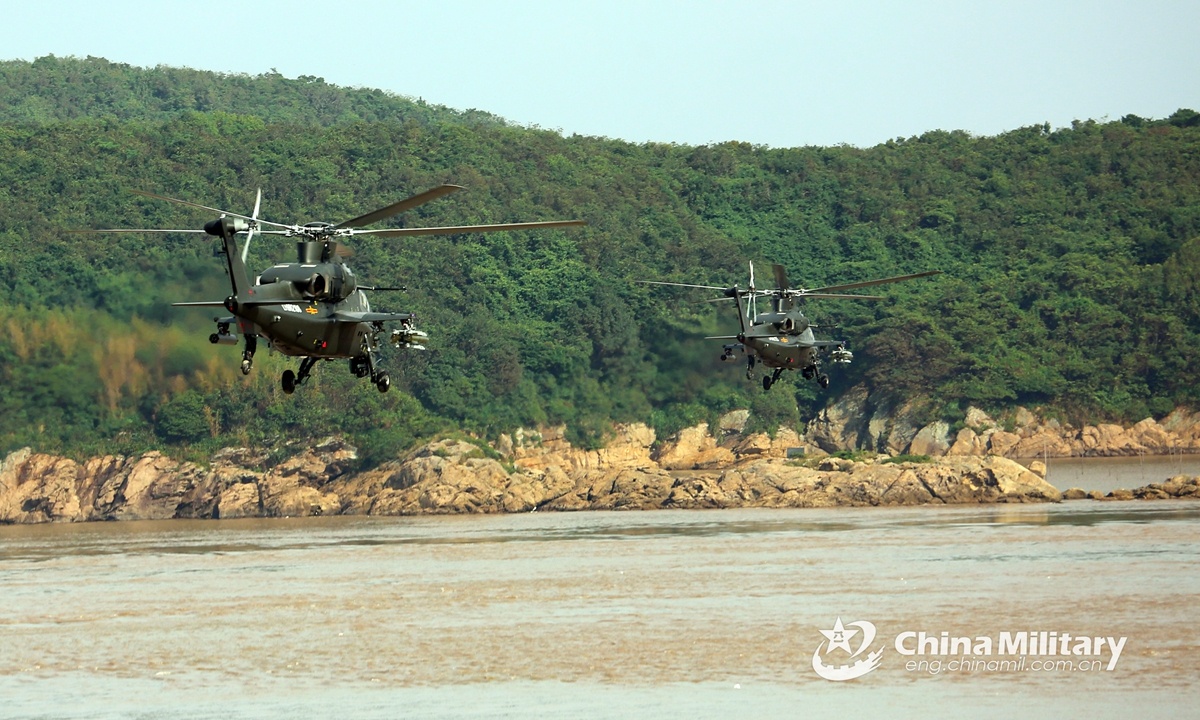 Two attack helicopters attached to an army aviation brigade under the PLA Eastern Theater Command fly in alongside formation above the sea at an ultra-low altitude during a flight training exercise on June 9, 2021. The flight training covered the subjects of two-plane formation flight, island defense penetration at low-altitude, maritime assault, etc. (Photo:China Military)

As the US recently launched consecutive military provocations against China, including landing military aircraft on the island of Taiwan and intruding in Chinese territorial waters in the South China Sea, the Chinese People's Liberation Army (PLA) held exercises in all major Chinese sea areas over the past week in moves that military experts said on Tuesday could be seen as countermeasures that displayed the PLA's determination and preparedness.

Waters south to the Pearl River Estuary and the Wanshan Islands of South China's Guangdong Province hosted a live-fire exercise on Tuesday, according to a navigation restriction notice released by the Maritime Safety Administration of China.

The exercise, about 300 kilometers from the Dongsha Islands that are currently occupied by Taiwan, came one day after a civilian variant of a military aircraft from the US landed on the island of Taiwan on Monday, a move deemed by Chinese mainland experts as yet another "salami-slicing" provocation by the US, after it landed a C-146A military plane on the island on Thursday.

"Taiwan independence" forces also made some fresh secessionist moves, including announcing the establishment of a representative office in Lithuania on Tuesday.

Just one day after the C-146A's landing, the PLA held joint amphibious landing exercises featuring amphibious armored vehicles of the Army and landing ships of the Navy in waters off East China's Fujian Province on Friday, geographically divided from the island of Taiwan only by the Taiwan Straits.

On Friday, the PLA conducted military exercises in the waters off East China's Zhejiang Province in the East China Sea, not far from the northern entrance to the Taiwan Straits, with media on the island saying the exercises were related to the US military aircraft's landing.

On Sunday, the PLA Southern Theater Command announced it recently organized a confrontational exercise in the South China Sea featuring multiple types of warplanes, warships, submarines and land-based missiles, a few days after a US Navy destroyer trespassed into the Chinese territorial waters of Xisha in the South China Sea and was expelled by PLA forces on July 12.

Military exercises are also being held in the Bohai Strait and the Yellow Sea from Sunday to August 1, read a separate navigation restriction notice issued by the Maritime Safety Administration.

The US recently increased its military provocations against China with the aim of flexing its muscles in the West Pacific, maintaining its hegemony and lending support to Taiwan secessionists. This met with strong countermeasures from China, not only by means of statements from the Chinese Defense Ministry, but also pointed exercises by the PLA, Xu Guangyu, a senior adviser to the China Arms Control and Disarmament Association, told the Global Times on Tuesday.

The US' moves are very risky since it is stepping on China's red lines, and China has to take action, Xu said.

Another military expert who requested anonymity told the Global Times that while the PLA drills were likely planned prior to the US' provocations, their purpose had always been to hone the PLA's combat-readiness and preparedness to deal with all kinds of provocations and safeguard national sovereignty and territorial integrity.

If the US continues to escalate the situation, it could face more powerful countermeasures from China, Xu said.