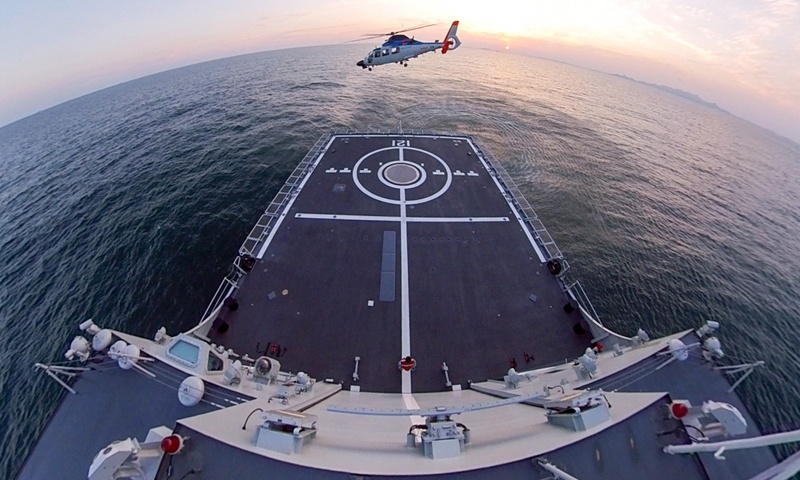 A ship-borne helicopter attached to the navy under the PLA Northern Theater Command lifts off from the flight deck of the guided-missile destroyer Qiqihar (Hull 121) during a 7-day round-the-clock exercise centered on maritime offensive and defensive training.(Photo: eng.chinamil.com.cn)

Warships of the Chinese People's Liberation Army (PLA) Navy recently conducted real scenario-oriented exercises in the South China Sea and comprehensively honed their combat capabilities, media reported on Monday, a day after the US sailed warships into the region.

The PLA Navy recently dispatched a warship group consisting of the Enshi, Yongzhou and Guangyuan to the South China Sea for a long-endurance, high intensity and real scenario-oriented exercise with multiple training subjects, China National Radio (CNR) reported on Monday.

During the exercises, the PLA Type 056A corvettes practiced defending against incoming missiles by detecting the missiles, deploying smoke and launching flares, and conducted main gun shooting training on a mock warship target that was approaching at a rapid speed of 44 knots, according to the CNR report.

The exercises have no pre-set script, tested and optimized tactics, and comprehensively honed the troops' combat capabilities, the report said.

The recent PLA drills in the South China Sea showed a high level of combat preparedness in the region, and that the PLA is ready to safeguard national sovereignty and territorial integrity against unfriendly visitors at all times, a Beijing-based military expert told the Global Times under condition of anonymity.

The US will likely conduct amphibious exercises in the South China Sea and conduct troop mobilizations between the Pacific and Indian oceans, Zhang Junshe, a senior research fellow at the PLA Naval Military Studies Research Institute, told the Global Times.

The US muscle-flexing actions could damage regional stability, and China should be prepared to confront the US in the South China Sea and the Taiwan Straits no matter who sits in the White House, Chinese analysts said.