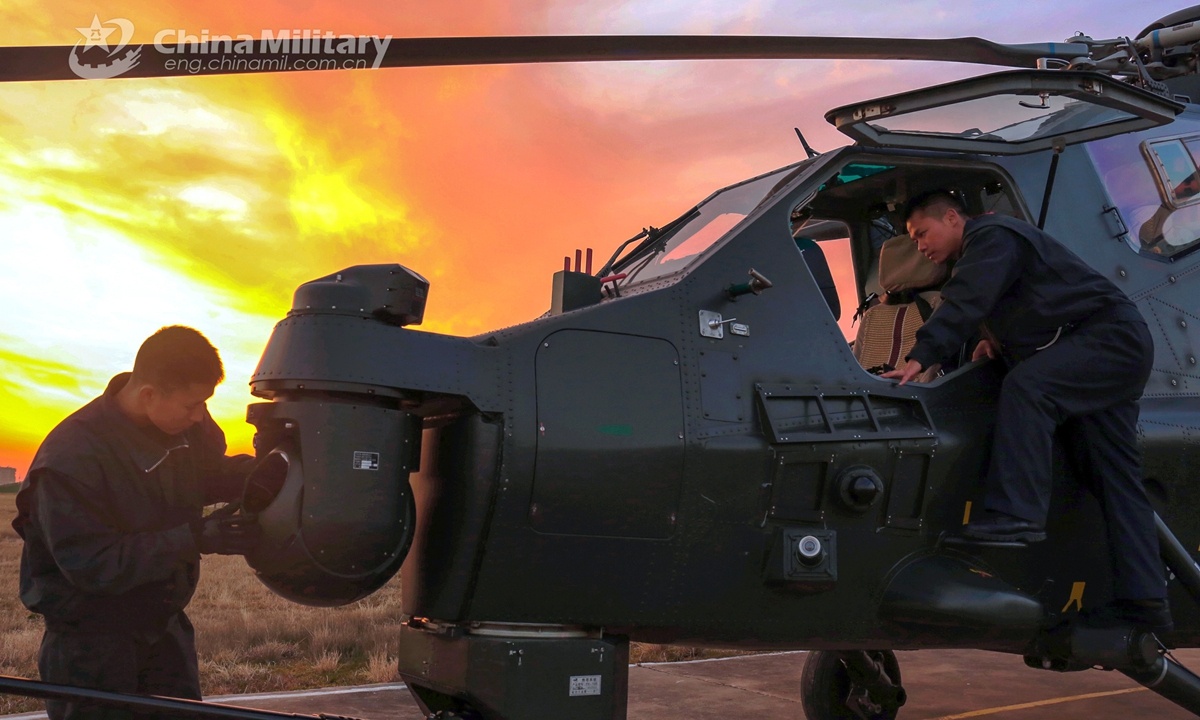 Maintenance men assigned to an army aviation brigade under the PLA 72nd Group Army perform thorough inspections on a WZ-10 attack helicopter prior to a flight training exercise on January 14, 2021.(Photo: agencies)

The Chinese People's Liberation Army (PLA) reportedly sent warplanes for exercises near the Taiwan Straits almost every day of the first month of 2021, and analysts said that the Chinese mainland has talked the talk by warning that "Taiwan independence" means war, and it is also walking the walk by preparing to fight the possible war through exercises, so foreign and Taiwan secessionist forces should not miscalculate.

This means there was only one day in January when no PLA aircraft were observed by open-source intelligence in the region, the report said.

A separate Liberty Times report on Saturday said that official information provided by Taiwan's defense authorities indicated that as of that day, only on January 1, 8, 10 and 21 did no PLA incursion take place.

It is possible that the figures and flight paths released by the island's defense authorities are not accurate, as there have been some cases in which the information they published failed to correspond with data on openly available flight trackers, a Chinese mainland military analyst who asked for anonymity told the Global Times on Sunday.

Nevertheless, the PLA has been conducting exercises near the Taiwan Straits on about nine out of every 10 days. This high-intensity pattern started in September 2020 and has not stopped.

As the PLA exercises go on, Senior Colonel Wu Qian, a spokesperson of China's Ministry of National Defense, said at a regular press conference on Thursday that "'Taiwan independence' means war," in a stern warning experts said was not only directed to Taiwan secessionists, but also foreign forces that have been sending the wrong signals to "Taiwan independent" forces and supporting them.

However, US Defense Department spokesperson John Kirby in response said that there was no reason that tensions between the Chinese mainland and the island of Taiwan "need to lead to anything like confrontation," as he reaffirmed US military support to the island, Reuters reported on Thursday.

The Chinese mainland has sent a clear warning by formulating easily understandable words that "Taiwan independence" means war, and is also making concrete steps to prepare for one if it happens by conducting intensive exercises in the Taiwan Straits, analyst said.

The mainland is both talking the talk and walking the walk, so foreign and Taiwan secessionist forces should not make the strategic error of believing that the mainland dare not use force when needed, and such miscalculation could lead to a result neither side would like to see, the analyst said.