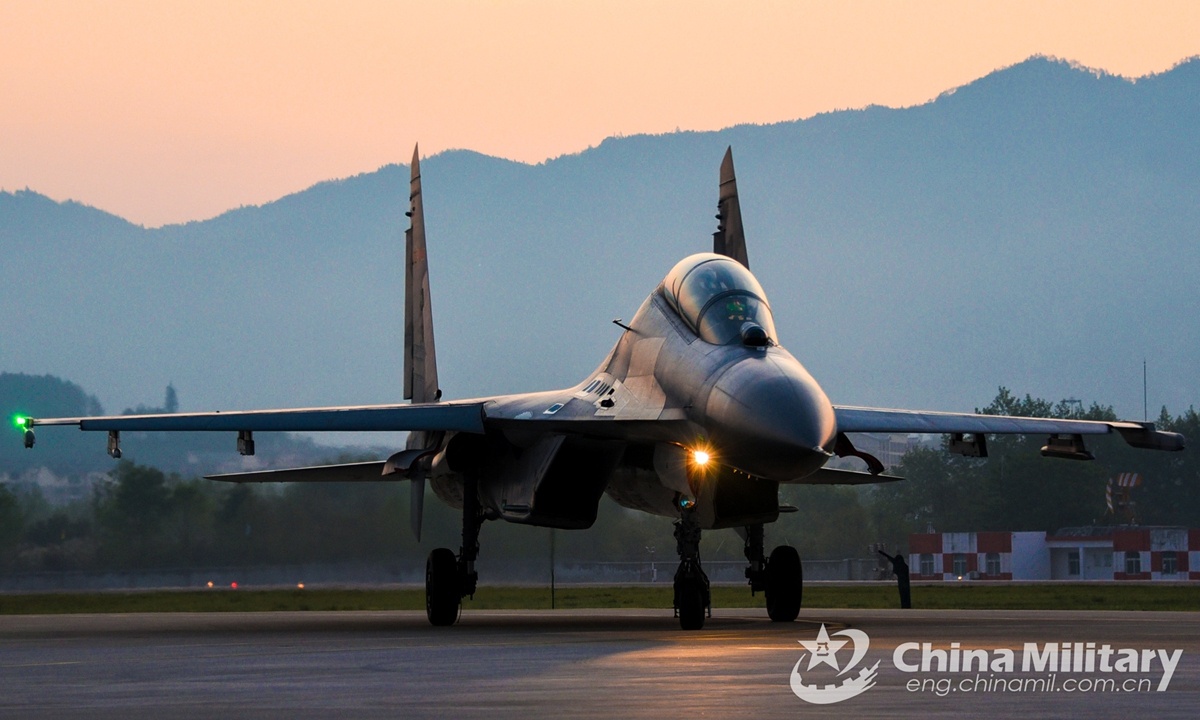 A J-11 fighter jet attached to an aviation brigade of the air force under the PLA Eastern Theater Command gets well prepared and awaits approval to taxi onto the flightline for a sortie on April 13, 2020. (eng.chinamil.com.cn/Photo by Fu Gan)

A large number of Chinese People's Liberation Army (PLA) warplanes recently conducted a series of intensive exercises around a Western Theater Command Air Force base, which is located at an important strategic point in Northwest China. The drills honed and demonstrated the Chinese military's capability to safeguard the country's western air defense border, analysts said on Tuesday.

The exercises, held above the vast desert in Northwest China, were a mock battle between red and blue teams, Passion News, a media outlet under k618.cn, a news portal run by the Communist Youth League of China Central Committee, reported on Monday.

Operatives on the ground, who had infiltrated to advanced locations, set up radio communication and guided the pilots of the multirole fighter jets, who then launched precision strikes on ground targets, Passion News reported.

During the exercises, a J-11 fighter jet was seen flying at very low levels in the mountains, and in another piece of footage, as many as seven J-11s formed a large formation, Weihutang, a China Central Television (CCTV) program covering news on military affairs, reported on Monday.

Flying very close to the ground is very risky and puts the pilot's technique and reactions to the test, but this tactic can effectively evade hostile radar and the naked eye, leaving the enemy with little time to react and few means of countering, a Beijing-based military expert told the Global Times on Tuesday, requesting anonymity.

A large formation of seven J-11s shows the base's capability to fight a large-scale air-to-air and air-to-ground combat, the expert said.

The J-11 fighter jet series is one of the PLA's main pieces of combat equipment used in missions like air defense and seizing air superiority.

CCTV report said that the Air Force base around which the exercises were held is located at an important strategic point in Northwest China, making it a key force in air defense in the west and a major pivot point for national air defense.

Over the past year, the base has taken advantage of all resources and forces, integrating aviation, radar, electronic countermeasure, and communication forces, and forces from the PLA Army and Rocket Force, and conducted seasonal real scenario exercises and monthly systematic training, Passion News reported.

This base covers multiple types of terrains at very different altitudes, and the troops are tasked to fly in plateau regions and to high sea to safeguard China's aerial interests, the report said, noting that the number of exercises including mock aerial combat, land assault, live-fire shooting, nighttime training, search and rescue and aerial delivery has increased significantly in 2020, and more than 90 percent of personnel have participated in large-scale missions.

A separate brigade attached to the PLA Western Theater Command Air Force is commissioning more J-16 fighter jets, a type of aircraft developed based on the J-11 but is even more powerful thanks to its advanced avionics systems, Shanghai-based news website eastday.com reported in November.