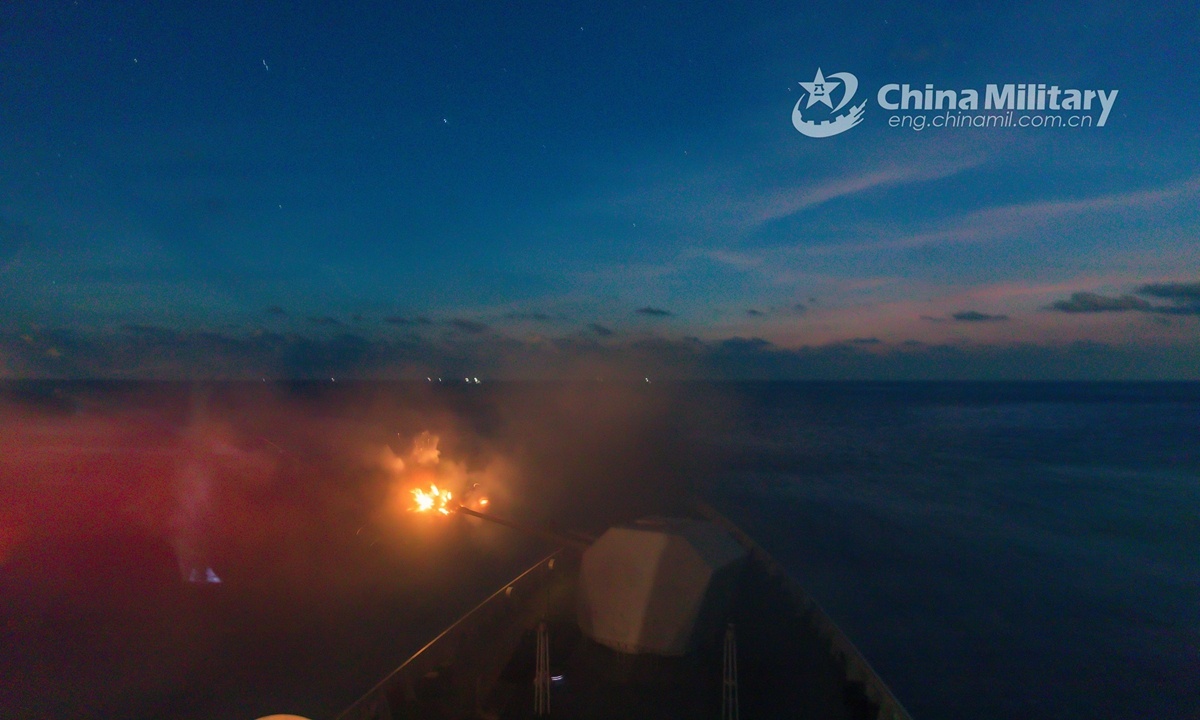 The guided-missile destroyer Hohhot (Hull 161) attached to a naval destroyer flotilla under the PLA Southern Theater Command fires its main gun at mock sea targets during a live-fire drill of a 4-day maritime real-combat training exercise on September 2, 2020. (eng.chinamil.com.cn/Photo by Li Wei)

The Chinese People's Liberation Army (PLA) announced new maritime exercises in the Yellow Sea on Monday, the dayas the US launched the Valiant Shield exercises around Guam, and the island of Taiwan started the computer-aided war games phase of the Han Kuang drills, with media saying both the US and Taiwan drills are aimed at the PLA.

Since late July, the PLA has conducted more than 30 maritime drills in all four of its major sea regions, and experts said on Monday that the PLA is ready to safeguard national sovereignty and territorial integrity, deter the US interference and Taiwan Taiwan secessionist forces, and, if they go too far, reunify the island by force and stop possible US intervention.

On Monday, the US is expected to start the Valiant Shield 2020 exercises on Guam and around the Mariana Islands Range Complex. The US Pacific Fleet said multiple warships, including the USS Ronald Reagan aircraft carrier and USS America amphibious assault ship, 100 aircraft and 11,000 personnel from the US Navy, Air Force, Army, and Marine Corps will participate in the 12-day drills.

The computer-aided war games phase of Taiwan's Han Kuang drills, which have the PLA as a "threat" in mind, also began on Monday, reported Taiwan's Liberty Times Net. It said in a separate report on Monday that the US exercises are also a muscle-flexing move at the PLA.

Guam is a US advance base in the Western Pacific, and a key nod in the second island chain aimed at containing PLA activities. The Valiant Shield features some of the main forces from multiple military branches, but Guam is within strike range of PLA missiles and bombers, a Chinese military expert who requested anonymity told the Global Times on Monday.

Taiwan's Han Kuang drills are a blatant attempt to resist reunification by force, which again showed the secessionists' ignorance on the power gap between the island and the mainland, the expert said.

Also on Monday, China's Maritime Safety Administration released a navigation restriction notice, and announced that the PLA will hold military missions in the northern Yellow Sea from Monday to Sunday.

Over the past two months, the PLA has conducted maritime exercises in all four major sea regions of the Chinese mainland, namely the Bohai Sea, Yellow Sea, East China Sea and South China Sea, with the total number of exercises exceeding 30, Shanghai-based news website eastday.com reported on Sunday, noting that these are incomplete data, and there were more PLA exercises.

While Chinese Defense Ministry spokesperson Wu Qian said at the routine press conference in August that the recent PLA drills in the Yellow Sea and South China Sea were annually arranged and not targeted at any country, he stressed that recent exercises by the PLA Eastern Theater Command along the Taiwan Straits were targeted at external interference and Taiwan secessionist forces.

The PLA drills are not only sending a warning to the US and Taiwan secessionists, but also enhance combat capabilities to reunify the island, experts said, noting that the PLA can deter and also win a war if it comes to that.