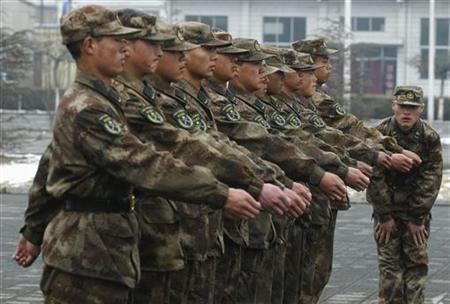 National lawmakers from the People's Liberation Army (PLA) and the Armed Police Force have suggested a motivational mechanism and more frequent military training exercises to further prepare them for combat.

A key issue is to unleash the potential and motivate people, which calls for awards and motivational systems to personnel to prepare them for battle, Tan Min, the deputy chief of staff at the PLA Central Theater Command, also a deputy to the 13th National People's Congress (NPC), said during an interview with China National Radio (CNR).

The mechanism could allow involved personnel to better conduct their duties, Tan said, noting that the reform is expected to bring a new look and changes to the military.

Training exercises for the armed police force have been put at the center of strategies, Bao Yingxiang, commander of the armed police corps of Tianjin Municipality as well as an NPC deputy, said, CNR reported.

"We added mobile forces and anti-terrorism forces to deal with emergencies, rescues and terrorist attacks, so that the armed police force could better fulfill its duty," Bao said.

Fu Guoqiang, another NPC deputy from the military and head of the Aviation University Air Force, noted that through military reform, education and fostering talent from military colleges the needs of the forces could be better reflected, CNR reported.