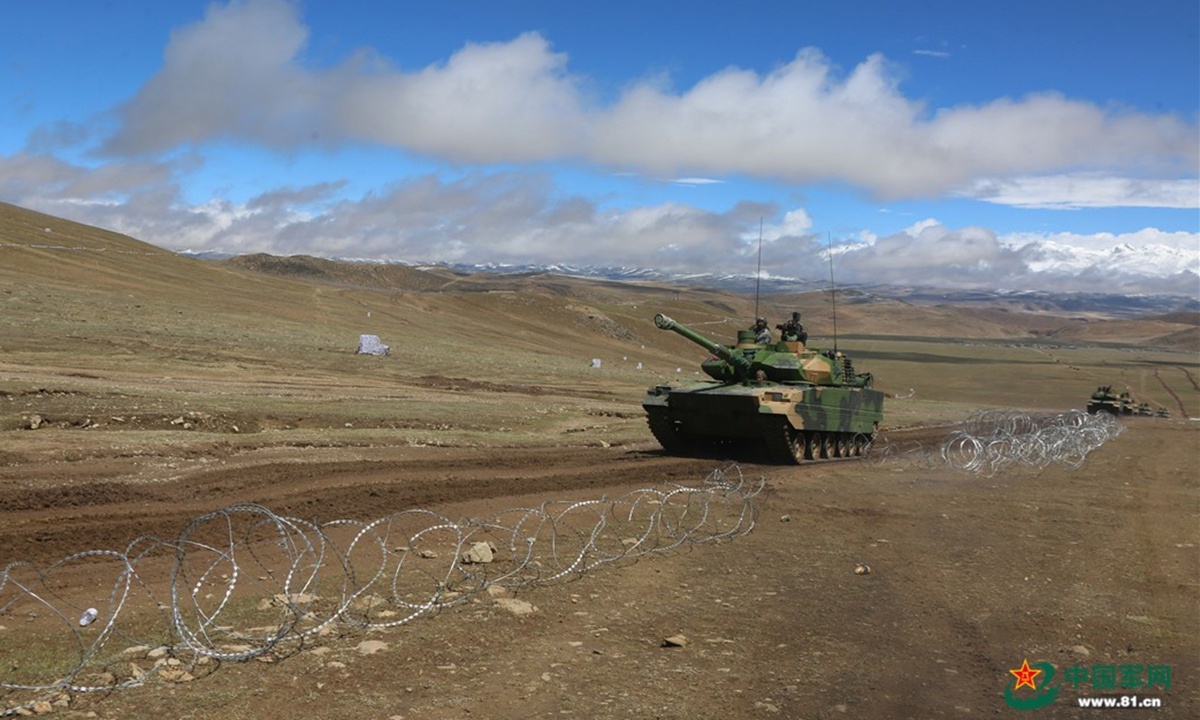 Type 15 lightweight tanks of the Chinese People's Liberation Army (PLA) were spotted participating in a recent exercise in a low temperature mountainous plateau region. This type of tank has significant advantages over other types of tanks or armored vehicles in such regions, experts said.

A combined arms brigade attached to the PLA Tibet Military Command recently took advantage of railways and motorized maneuver approaches in a cross-day-and-night long-distance maneuver exercise into regions more than 4,000 meters above sea level, js7tv.cn, a video news website affiliated with the PLA, reported on Thursday.

Most of the heavy weapons and equipment featured in the drills were newly commissioned, the report said.

Military observers noted the number of heavily armored vehicles involved is large. In one scene from the news footage, about 30 Type 15 light tanks can be seen, in addition to different types of infantry fighting vehicles and trucks, also in large numbers.

The exercise again showcased the PLA's capabilities of deploying heavy equipment suitable for high-altitude combat in plateau regions, and was done very fast in large numbers, and simultaneously via multiple transportation means, a Chinese military expert told the Global Times on Thursday under the condition of anonymity.

Dozens of tanks, fighting vehicles, assault vehicles, truck-based howitzers and well-equipped foot soldiers can take back, control and defend a large zone, particularly when the enemy is not equipped with heavy weapons and equipment, or tired under harsh environments, the expert said.

The 30 ton-class Type 15, which entered PLA service in 2018, is significantly lighter than most main battle tanks in the world. Any heavier tank would struggle in plateaus due to the lack of oxygen to support the engine, while any lesser armored vehicle that can operate on plateaus are no threat to the Type 15, analysts said.

Despite recent positive, constructive talks between China and India over the months-long border dispute, Indian media NDTV reported on Wednesday that the standoff shows no sign of easing as Indian soldiers received clothes imported from the US to endure the harsh winter along the border.

The Indian Army maintains 60,000 of these extreme cold weather clothes for troops deployed along the China border, Indian media said, noting that an additional 30,000 is needed since close 90,000 troops are posted in the region as a result of the standoff.