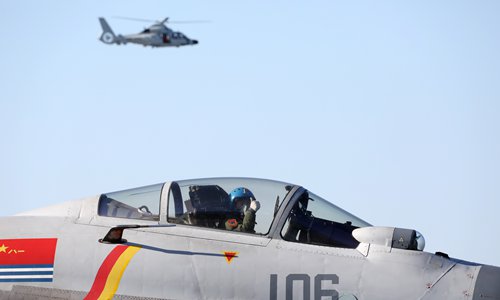 A PLA navy pilot prepares to fly over the Bohai Sea in 2016. Photo: VCG

As China's aircraft carrier fleet expands, the Chinese navy is exploring ways to streamline the training process for its pilots by introducing a new generation of aircraft to aeronautical university training programs, Chinese military experts said on Thursday. According to the Chinese People's Liberation Army (PLA) official website 81.cn, China's Naval Aeronautical University deployed a third generation domestically-made training plane for its pilot cadets in the skies of Bohai Bay on Tuesday.Although the report did not specifically name the aircraft used in the training, Song Zhong, a military expert and TV commentator, told the Global Times it was likely to be the Navy JL-10H, also known as the L-15B Falcon supersonic jet.It marks the first public reported deployment of the L-15B jet trainer, which was developed by Hongdu Aviation Industry in Nanchang, East China's Jiangxi Province.The use of such an advanced trainer jet at university-level training programs shows the PLA Navy is exploring a more streamlined training system which will conclude after only two stages at the university and the navy. This is a significant streamlining of the previous process, which involved a three-level system consisting of training at military bases between the two, Song said. "The PLA Navy has indeed been devoting increasing efforts to training its pilots, especially for aircraft carrier-based planes," Zhang Ye, a research fellow at the People's Liberation Army Naval Research Institute, told the Global Times on Thursday.Testing the watersChina currently has only one aircraft carrier, the Liaoning, which was commissioned into service in 2012. The country's second carrier and the first domestically-built one, widely known as the Type-001A, is expected to soon undergo sea tests.The sea trial for the Type-001A could be conducted as early as the beginning of 2018, Zhang Ye previously told the Global Times.The Type-001A is similar in appearance to the Liaoning, and also has a ski jump-style launch ramp on its flight deck where aircraft are launched and recovered. It is thought to be able to carry about 40 jets, roughly the same number as the Liaoning, Yin Zhuo, a senior researcher at the PLA Naval Equipment Research Center, told a China Central Television (CCTV) military program in December. "The number of pilots for fixed wing shipboard aircraft should be around twice as many as the carrier can carry, that is to say, it will be somewhere between 80 and 100," Xu Guangyu, a retired major general and senior adviser of the China Arms Control and Disarmament Association, told the Global Times on Thursday.Recruits neededThe Naval Aeronautical University opened in 2017, the result of merging the navy's aviation academy and its aeronautical and astronautical university, according to the PLA Navy official WeChat account on May 31. The university recruited 450 pilot cadets in its first round of admissions. The Chinese navy will urgently need about 400 pilots, as China is expected to roll out at least four aircraft carriers in the near future, Song noted. He also stressed that instead of using pilots from the PLA Air Force who fly from ground bases and have developed a different flying experience than that needed for shipboard flights, it was better to train new pilots for aircraft carrier-based tasks. The subjects for the navy-trained pilots cover the ski-jumping launch style for China's current aircraft carriers with upward decks, as well as catapult take-offs for the country's future straight-deck aircraft carriers using an electromagnetic launcher system, Xu said. The catapult take-off training includes both ground-based and shipboard exercises. By the time the shipboard training is completed, China will have its third aircraft carrier with an electromagnetic launcher system ready, Xu noted. The university has its main campus in Yantai, East China's Shandong Province, and three other campuses in Northeast China's Liaoning, North China's Hebei and Northwest China's Shaanxi Provinces.The PLA Navy's pilot-training university facilities are mainly located in northern China because the region has better weather conditions and longer training-friendly hours for the pilots than the south of the country, Song said.The first batch of navy-trained pilots successfully completed night missions over the South China Sea in a new type of fighter jet in August 2017.Independently trained by the PLA South China Sea Fleet, the pilots underwent multiple night flight mission training, including solo flights, multi-fighter coordination, target search and strikes over the South China Sea, CCTV reported. All training missions were accomplished in one operation, it said.