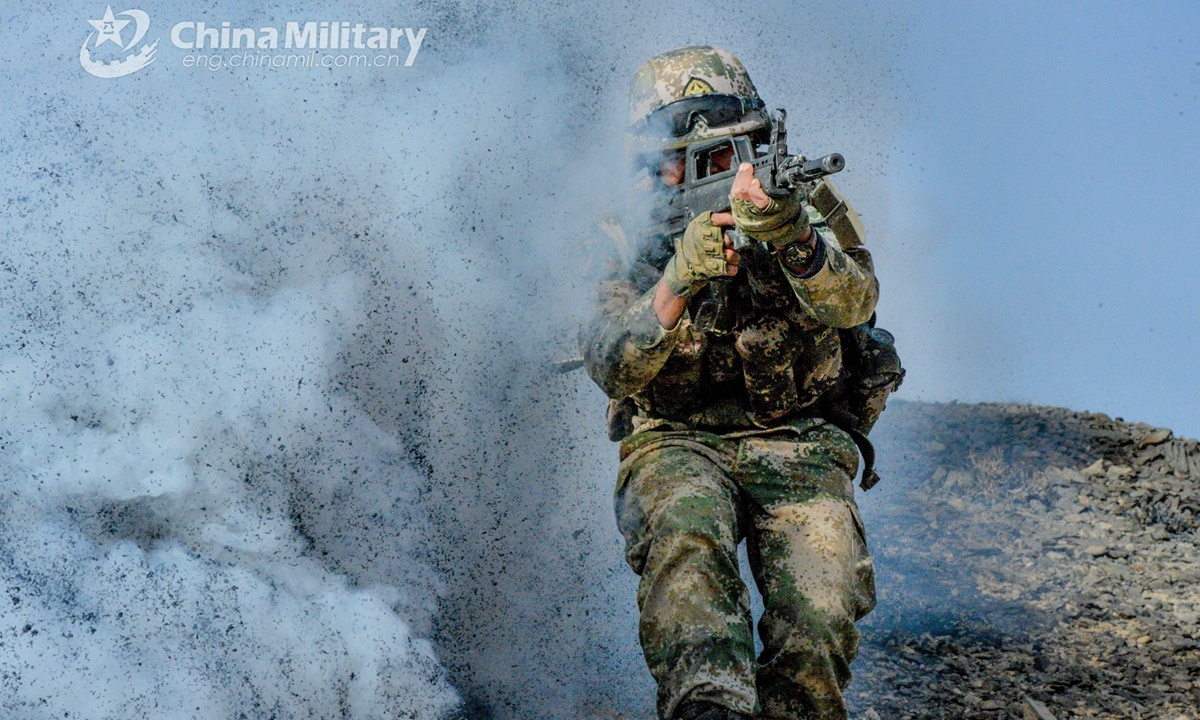 A soldier assigned to a combined arms brigade under the PLA 76th Group Army uses smoke bombs to create a smokescreen for concealment as he engages mock enemy with his rifle during a real-combat drill on September 26, 2020, which aims to beef up soldiers' courage and uprightness in battlefield. (Photo: China Military)

A new type of heavy machine gun, possibly the lightest of its kind in the world, was recently spotted in an amphibious landing exercise held by the People's Liberation Army (PLA), indicating that the weapon with powerful suppressive fire has now entered Chinese military service.

The new gun was featured for the first time in a photo released with a report posted on 81.cn, the PLA's website, in 2018. No details were given at that time.

Not yet known by its designation, the new 12.7-millimeter-caliber heavy machine gun boasts a similar structural design to the QJZ-89, a heavy machine gun widely used by the PLA, but many details, including the aiming sight and cartridge box, are very different, eastday.com said.

Citing military commentators, the eastday.com report said that this new gun is likely developed from the QJZ-89 but with a reduced weight. The QJZ-89 weighs 26 kilograms in total, 17.5 kilograms for the gun and 8.5 kilograms for the tripod; but thanks to the new design and new composite materials, the new gun could weigh as little as 20 kilograms, making it the lightest 12.7-millimeter-caliber heavy machine gun in the world.

A heavy machine gun that is light in weight has many advantages, with the most significant being that it can provide high mobility to its user, a Chinese military analyst told the Global Times on Sunday, requesting anonymity.

It enables a single soldier to carry the weapon without much burden at all, the analyst said, noting that heavy machine guns provide very strong suppressive fire on the battlefield, giving friendly troops more tactical options.

Its light weight, however, could also bring about possible weaknesses such as poor accuracy, but the gun's design will have reached a certain balance, the analyst said. "This kind of super-light heavy machine gun could be particularly useful in high-altitude and mountainous regions, or in amphibious landings and fast-reaction operations, when heavier machine guns might prove to be difficult to maneuver with."

After featuring in the exercise by the PLA Marine Corps, the gun has likely entered mass production and military service, eastday.com reported.