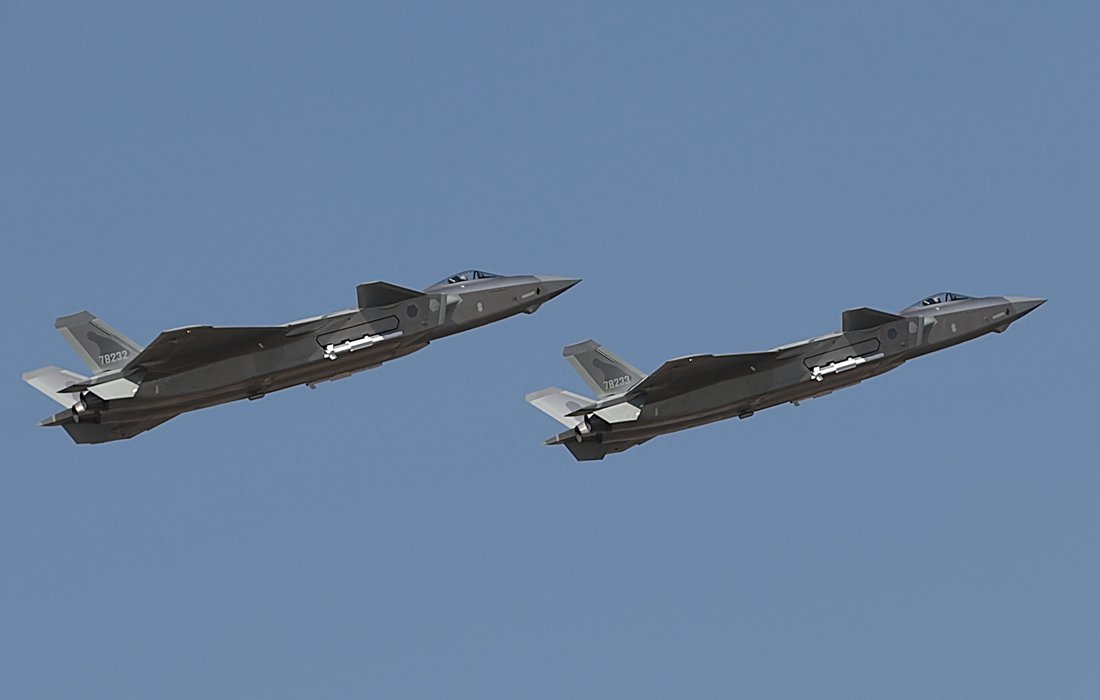 A J-20 stealth fighter jet of the Chinese People's Liberation Army (PLA) was reportedly spotted soaring through the skies above an East China city only 500 kilometers away from the island of Taiwan, sparking fear on the island and delivering a powerful warning to Taiwan separatists and the US, as the island's media reported on Saturday that Taiwan warplanes were only minutes away from entering its kill range if it flew toward the island.

The J-20 holds a generation gap advantage over all of Taiwan's warplanes, and its involvement in a potential PLA operation on Taiwan would result in a one-sided PLA victory in the air, analysts said on Saturday.

Citing an unverified video widely circulated on Chinese mainland social media platform Sina Weibo since Friday, Taiwan media reported on Saturday that a J-20 was spotted flying low near the urban district of Quzhou, East China's Zhejiang Province. The report said it was likely in the process of landing at an air force base in the city.

It is possible that the J-20 is attached to the Wang Hai Air Group based in Wuhu, East China's Anhui Province, and is being forward-deployed to Quzhou, Taiwan media speculated.

Quzhou is only 500 kilometers away from Taiwan. If a J-20 takes off from Quzhou and heads toward the island, it would only take the PLA aircraft seven to eight minutes before Taiwan warplanes enter its air-to-air missile kill range, and 15 to 20 minutes before it could be right above Taipei, Taiwan media said.

The PLA Eastern Theater Command has announced aerial and naval exercises in the Taiwan Straits since September 18; however, it has not yet released further details, including if it had deployed any J-20 for the drills.

Meanwhile, Taiwan's defense authority has been releasing tracking reports on PLA warplane sorties near the island amid the PLA's ongoing exercises, but they did not reveal any J-20 activities.

Thanks to the stealth capabilities of the J-20, even if it did take part in the exercises, Taiwan would not be able to spot it anyway, a Chinese mainland military expert told the Global Times on Saturday on the condition of anonymity.

The J-20 is a fourth (or fifth, under Western classification) generation fighter jet comparable with the US' F-22. It has strong capabilities in terms of stealth, situational awareness, supermaneuvrability and supersonic speed, the expert said, noting that Taiwan's most advanced aircraft is the F-16, developed by the US, which is one generation obsolete compared to the J-20, and the J-20 can single-handedly take on multiple of them.

In a recent PLA combat exercise, a pilot flying "a new type of warplane" coordinated with his teammate when facing interceptions from multiple directions, taking down 17 opposition fighter jets without receiving any damage itself, despite being heavily outnumbered, the PLA Daily reported earlier this month.

Many media outlets speculated this new warplane was the J-20, and it demonstrated the stealth aircraft's absolute superiority over its previous generation counterparts.

With the J-20 already in service by the PLA Eastern Theater Command, if a war breaks out in the Taiwan Straits, it would very likely be deployed in combat, even it would be an overkill, analysts predicted.

J-20s can take down not only hostile fighters, but also key strategic targets like hostile command centers, significantly contributing to the seizure of air superiority in combat, the expert said.