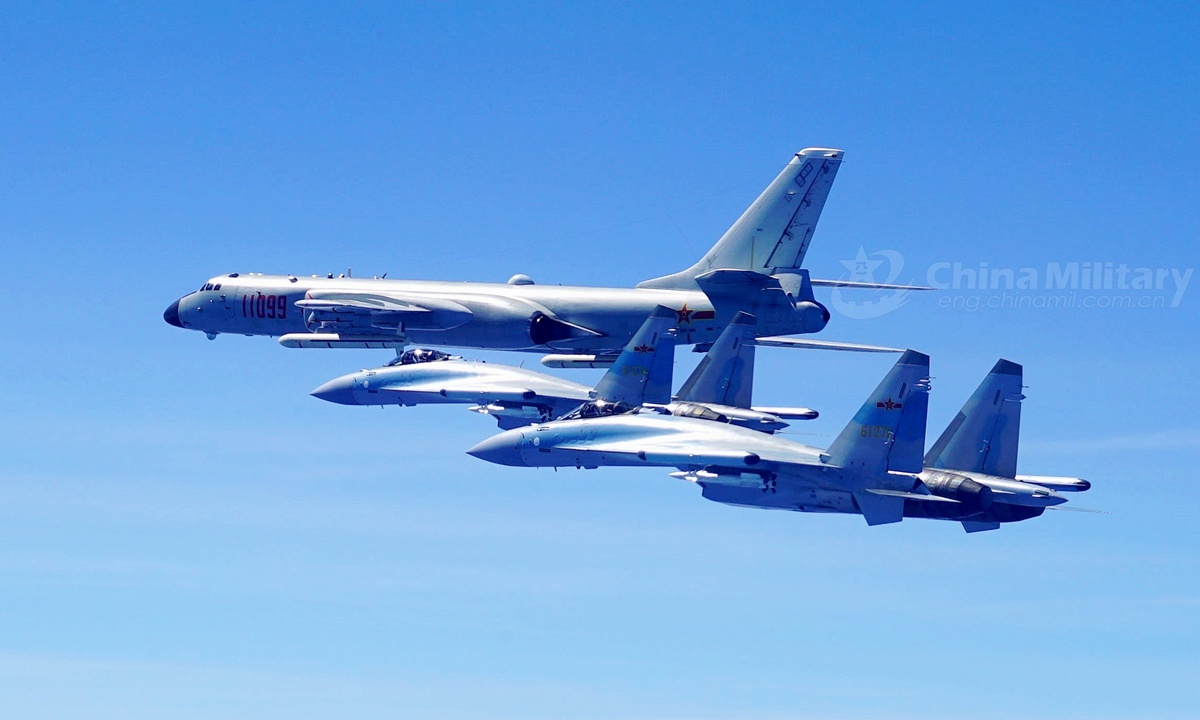 Two Su-35 fighter jets and a H-6K bomber fly in formation on May 11, 2018. The People's Liberation Army (PLA) air force conducted patrol training over China's island of Taiwan on that day. Su-35 fighter jets flew over the Bashi Channel in formation with the H-6Ks for the first time, which marks a new breakthrough in island patrol patterns, said Shen Jinke, spokesperson for the PLA air force.(Photo:China Military)

The warplane exercise by the Chinese People's Liberation Army (PLA) near the island of Taiwan on Friday is not only the largest since the PLA started routine exercises in the region last year, but also a rare one that saw bombers flying to the eastern side of the island.

The large-scale exercise showed that the PLA is capable of surrounding the island of Taiwan and blocking it from receiving foreign reinforcements, and also sent a strong warning to the coast guard agreement the US signed with the island on Friday, analysts said.

Taiwan is having more official cooperation with the US, now even in the field of the coast guard, which is a pure provocation against the one-China principle, Song Zhongping, a Chinese mainland military expert and TV commentator, told the Global Times on Sunday.

Unlike the daily PLA exercises which often feature a small number of reconnaissance aircraft, Friday's exercise featured a large warplane fleet with multiple types of aircraft, pointed at a potential military conflict against Taiwan, Song said, noting that if it really happens, many more PLA warplanes would participate.

According to the flight paths of the PLA warplanes released by the island's defense authorities, some H-6K bombers and a Y-8 anti-submarine warfare aircraft crossed the Bashi Channel and flew to the eastern side of the island, rather than only to the usual western side, before returning.

From that position, the PLA can not only strike military facilities on the east of the island, but also lockdown the island entirely, analysts said.

In a scenario of a military conflict, the PLA will likely surround the Taiwan island from all directions with large fleets, including aircraft carrier combat groups, and then attack possible reinforcements from the US and Japan, Song said, noting that the island is very close to the Chinese mainland, meaning it is entirely covered by PLA strike range.

The Friday exercise likely practiced this blockade, in which the PLA seized air superiority and control of sea from Taiwan's forces, and then defend against foreign interventions, Song said.