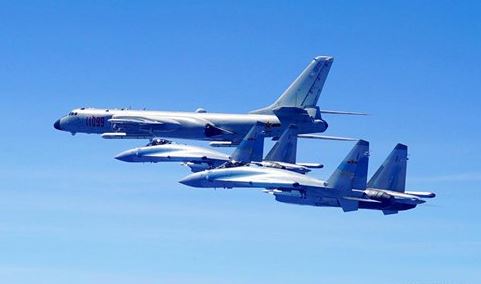 The Chinese People's Liberation Army (PLA) Sunday organized warships and warplanes in a combat readiness patrol, with aerial forces crossing through the Bashi Channel and Miyako Strait, a move that an authoritative source said was sending a stern warning to Taiwan secessionists.

The PLA's move at the moment also showed that mainland military capabilities were hindered not one jot by the ongoing novel coronavirus outbreak and its will to safeguard national unity has never been undermined under any circumstance, Chinese mainland analysts also said.

During the mission, the aerial forces cruised through the Bashi Channel and Miyako Strait and conducted real combat-oriented training, Zhang said.

Taiwan and its affiliated islands are inalienable parts of China, and the Chinese military's combat-readiness patrol was a completely legitimate and necessary action aimed at the current security situation in the Taiwan Straits and safeguarding national sovereignty, the spokesperson said.

The troops were determined and capable of crushing any "Taiwan secessionist" activities, resolutely safeguarding national sovereignty and territorial integrity and peace and stability in the Taiwan Straits, Zhang said. The straightforward comment from the spokesperson stating that the patrol targeted Taiwan secessionists is rather rare as usually the mainland military authorities may address such a move as a routine arrangement according to the annual schedule, analysts said.

Zhang's statement came after the Taiwan defense authority said Sunday that the PLA sent J-11 fighter jets, H-6 bombers and KJ-500 early warning aircraft through the Bashi Channel into Western Pacific and then through the Miyako Strait, returning to their bases in a route that circled the island from its eastern side, according to Taiwan news website udn.com.

An authoritative source who declined to be named told the Global Times that Taiwan's Democratic Progressive Party has been increasingly colluding with the US, attempting with the US to confront the Chinese mainland, planning Lai Ching-te's US visit, seeking "independence," and the PLA action is a stern warning in response to that.

The Taiwan authorities are also leveraging the novel coronavirus pneumonia (NCP) outbreak to clamor for joining the World Health Organization (WHO), even claiming the NCP information related to Taiwan provided to the WHO by the mainland is false, and also prohibiting all people from the mainland visiting the island, despite the mainland's efforts in helping Taiwan residents in the mainland return home.

Mainland military expert Peng Guangqian told the Global Times on Sunday that since Tsai Ing-wen was reelected as Taiwan's regional leader, her ambition for "Taiwan independence" has further expanded and become increasingly undisguised, which is making cross-Straits relations drift away from solidarity.

PLA latest actions are a show of its will to safeguard national unity, Peng said, noting that the PLA Eastern Theater Command is the closest theater command to the Taiwan Straits and its combat area covers the Straits, as it will become the main force in the reunification process.

The PLA possesses military strength much more powerful than the island, and the combat-readiness patrol meant it was ready for combat, another military expert who asked not to be named told the Global Times.

The ongoing coronavirus outbreak has had little impact on PLA capabilities, as the PLA is highly disciplined, experienced in preventing infectious diseases among the troops and possesses expertise in biological defense, the expert said.